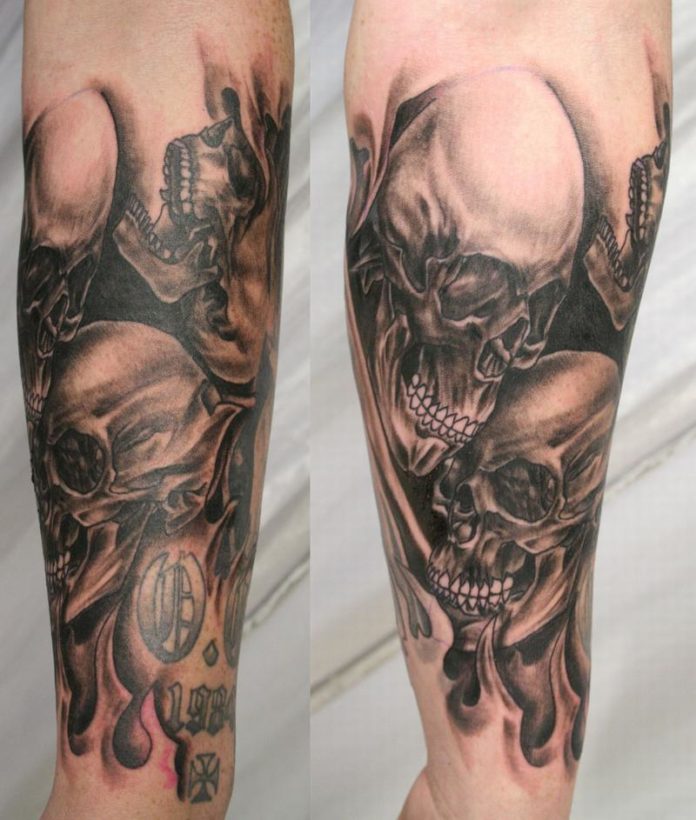 A skull For All Season And All People

The skull tattoos are also loved by all the people and even artist tattoos. You can design this tattoo with an outline design and shading. The skull is a link to the all universal culture. These skull tattoos are a universal symbol of unity in different cultures. As everyone is a human, and after that, they will be in the graveyard with the skull left. Here is the list of most common meanings related to skull tattoos.

What Does A Skull Tattoo Represent?

A human tattoo skull does not directly represent death, but it is somewhere connected to mortality. Let’s understand this in a very simple way. Skull tattoos do not symbolize the death of any person, but they remind us about our death. A person who is having a skull tattoo inked on his/her means that he knows that he will die someday. Many of you might interpret this into a negative meaning, but it is not at all a negative tattoo. This tattoo is related to the reality of death. And this is not just to remind us about our death; it is also about living the rest of the moments tension-free. You can make the best out of that time. According to research, people believe in this theory of having a skull tattoo because it is a sign of living live a freer and a better life.

You should take advantage of this thought that you have some life to live and you can do a lot in this life. And also reminds us that death is just a part of life, and you do not need to worry about it. The people who are the wearer of the skull tattoos believe that death is a fact that has to come, and now they do not fear it. There is a very famous saying in the Latin language ‘memento mori’ that means ‘remember that you must die.’ In every religion and culture, it is said that it is good to have a knowledge of death, but fear of death makes you sicker.

You must have seen some Hollywood movies which show war and rebels. In those movies, a skull flag was shown when any of the people started rebelling. In some cultures and geographical circles, the skull tattoos are a symbol of rebellion. Many of the people from history used this skull tattoo ton shoes their disagreement against the rules of their clan or society. For example, we all know the famous Jolly roger, the black pirate flag, which had a skull and crossbones symbol. When they were about to attack another clan, the pirate flew this flag as the rebellion.

It was also the signal of death and destruction. It is also considered that these tattoos are also a part of the pirate culture as the pirate business is considered as the business that breaks the most laws. In fact, many of the pirate groups also used this as the flag.

The interesting fact is that this skull and crossbones symbol was also used in the 16th century. One more interesting fact about this design is that a tattoo that does not have a lower jaw means the prostitutes and sexually active people. Brothel owners also used it. It was usually not accepted by traditional society and was considered as immoral. Some people used to wear a ring with a skull design in it to show the rebellious behavior. This was not just for social practices; it was also about disagreement about anything; it might be war or some other practices.

In many cultures and geographical areas, the skull is a symbol of victory over someone. People mainly used it when the clan’s army sent the messages back to the clans; then, they used to show this as a message of victory. There are many stories related to this point; some say that clans like Vikings, Scythians, and Xiongnu used to drink wine in the skull using them as a cup whenever they used to win. Some say that these clans practiced Gruesome practices. But there is nop such strong proof of these practices.

In some cases, the skull used to represent the victory, death, and fears of life. In some clans, the skulls are a sign of spirituality where it is a sign of courage to face death.

In the introduction part of this article, we have talked about the very basic similarity between us. In the last some years, it was seen that skulls are a sign of equality. This was basically about a theory that everyone is human, and everyone’s skull is the same at the end, so why do not we use it as the sign of equality. The idea behind this theory is that we all humans have the same skull. If we do not conder these small bone structures, then we all are the same.

This is not any new idea; it also has a huge mention in various mythological books as in the holy book of the bible, it is written that everyone has to die. Even the king and peasants are equal in front of death. Death never leaves anyone untouched any religion, sex, wealth, looks never matter. John Donne said that “we are all equal in the presence of death” many poets from different centuries said that “death comes equally to all of us and makes everyone equal in the end.”

Meanings Of Some Skull Tattoo Design

The meaning of a bull skull tattoo is that it is a symbol of courage, agility, and strength. These tattoos are famous in the area of the Western side of the united states of America and Texas.

In the famous culture of Celtic, the Celtic skull tattoo meaning was power. The skull was the seat of the soul in Celtic culture. It also represents the understanding of new portals and transience.

A very classical tattoo mostly used by the pirate clans or groups. This tattoo shows the brutality and despair associated with the famous pirates. If you ask someone the meaning of a skull tattoo, they might say that it is poison. But you do not need to laugh at them as many of the cultures have shown the sign of poison with this design.

The death head tattoos were originated in England. This is a skull design without a jaw that shows the rebellion part of this meaning. Prostitutes and drug dealers used to wear this tattoo.

This is the easiest tattoo to draw. This tattoo means courage, the circle of life, and good fortune.

It comes from Mexico’s nation; they have a very famous festival called Day of the Dead, where every house memv=ber draw the skulls.

Skull and rose tattoo meaning is that it is the symbol of duality Between Life and death. It is a very popular tattoo among youngsters.

it is a very bold tattoo which is designed in the memory of someone who is dead and comes in the dreams of one person. It is also used out of respect for the dead.

Snake and skull tattoo meaning is related to spiritual destruction and natural death. These tattoos are the perfect blend of both situations.

Skull With A Crown Tattoo

the skull with a crown tattoo meaning is directly related to this theory that the wearer will die like a king.

Butterfly skull tattoo meaning is related to mortality and a new life.

If you loved this article, then please leave your valuable feedback in the comments section below.