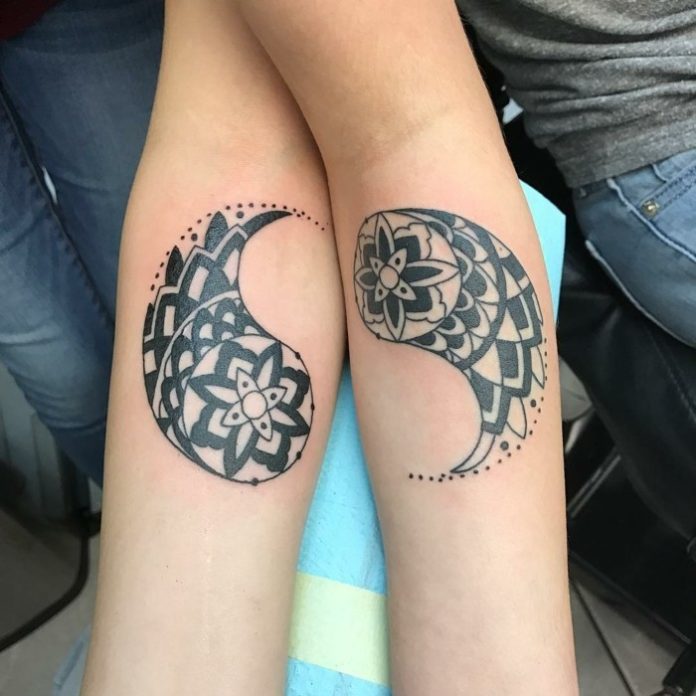 Yin yang tattoo originates from the Chinese cultural philosophy and cosmology. This concept is more than 3,500 years old and has a belief that both evil and good are necessary to maintain a balance.

Yin and Yang’s tattoo is represented by a symbol forming a circle separated in two halves by a curved line. Yin is the black color half, which symbolizes evil, dark, and inward energy. Yang is the white color half representing bright, white, and positive outward energy. Both yin and yang symbol consists of a dot of the opposite color, symbolizing that they are incomplete without each other.

If you feel connected to this culture and want to get the cool Yin and Yang symbol inked, you are at the right place. In this article, we will explain Yin and yang tattoo symbolism, history, meaning, and ideas of this ancient tattoo.

Yin Yang tattoo ideas have been quite popular since the 90’s due to their powerful meaning. The Yin and Yang symbol has a various meaning that we have discussed below:

Each Yin and Yang symbolizes specific quality and symbolizes that opposites attract each other. The Yin is the black side that embodies the dark, feminine, earth, and spiritual side of everything. At the same time, Yang is the white side representing masculinity, heaven, light, and odd numbers.

Yin and yang are connected to the cosmos, earth, and changing seasons.

Yang yang tattoo is a symbol of Taoism.  The yin and yang symbol is associated with Chinese religion and Taoism philosophy. Its roots are deeply steeped into the ancient spiritual teaching of Chinese culture.

Origin and History of the Yin Yang Symbol

Yin and Yang symbol originated from the Chaos of the Universe with both the forces resting in the center of the earth. This symbol originated during the 3rd century BCE and was first introduced by a Chinese cosmologist named Zou Yan.

Yan believes that life progresses through five phases: wood, water, and earth. These earth elements are known to give form to earth while explaining the human phases of rebirth, death, growth, life, and maturation.

In China, people believed the five-element theory, that Yin and Yang combined work together to demystify the stages, shifts, and happening in life and on earth.

We have mentioned some of the most popular Yin and Yang tattoo ideas to get inked.

Koi Fish is believed in Chinese culture and Feng Shui to symbolize the attributes of prosperity, luck, perseverance, abundance, and courage. The Koi fish yin yang tattoo is known to represent various life lessons faced during the journey on earth.

A Koi fish and yin yang symbol in tattoo show an important connection between both the symbols. Koi fish tattoo works beautifully represent the forces by which heaven, earth, and humans move.

Dragon tattoo symbolizes masculine energy like the yang and is a representation of strength, courage, and fortitude. People who want to get inked with a yin yang dragon tattoo can balance the art between both sides by creating imagery to increase the yang qualities. Dragons have always been a popular choice of tattoo designs, and when paired with the symbol, it displayed a powerful and deep message.

Wolf is a symbol of spirit, loyalty, ritual, and guardianship. When yin yang is paired with a wolf tattoo, it represents the belief that every person has a dark and light side within.

The tale explains that whichever side we will nourish more will grow within us. This meaning of the yin yang wolf tattoo makes it a strong reminder that we should nourish the quality that we want to emphasize.

The Sun and Moon represent the phases of the day and night, masculine and feminine traits, conscious and subconscious components of the mind.

Both Sun and moon work together perfectly and mirror the yin yang tattoo meaning. Together they create a unique and gorgeous tattoo design embedded with mystical meaning.

Mandala is considered a spiritual symbol used in Hinduism and Buddhism. It is known to represent that everything in the Universe is connected together.

Yin yang tattoo with mandala designs work really well and compliment the imagery of both symbols symbolically as well as visually.

Flower Tattoos have been popular since forever and attract a large crowd. You can make your simple flower tattoo special and unique by adding the elements of yin and yang tattoo ideas.

Each flower has its own unique meaning, which you can personally tailor by getting inked with a yin yang flower tattoo. This will create a unique design with a deep, intended meaning.

Dream catchers are being used for a long time by Native Americans to explain the nature of real life. A dream catcher is known to symbolize the circle of life and connection to all. Yin Yang and Dream Catcher tattoo combined to create a complementary and multifaceted design that will assist you in your spiritual journey.

This is another great yin yang tattoo ideas. The tree of life is a spiritual symbol, and when combined with Yin Yang, both work synergetically.

The imagery within both tattoos represents the importance of balance in life and is a constant reminder that energy harmony boosts the ability to prosper and grow.

Pairing tiger and dragon with a yin yang tattoo creates a very strong look that will boost your tattoo’s spiritual energy. Tiger is a representation of the yin side, while dragons represent the yang energy.

Together, these facets ensure that the tattoo provides a balance of energy, which makes it great for choosing anyone who wishes to bring more peace and harmony in life.

A yin yang heart tattoo is a great representation of high and low self-concepts or the good, bad human counterparts. This tattoo demonstrates the ideas about one’s heart’s polarity and illustrates the soul’s connection to the symbol.

Read More:- All About Owl Tattoos Meanings, Symbolism, and Ideas

Yin Yang symbol is part of Chinese culture and stems out of the oldest principle principles of cosmology and philosophy. A yin and yang tattoo is popular among people because of its deep and spiritual meaning.

Whether you are looking for simple or intricate yin yang tattoo ideas, the symbols have a deep meaning and great significance. This tattoo symbol explains the universal forces both outside and within us.