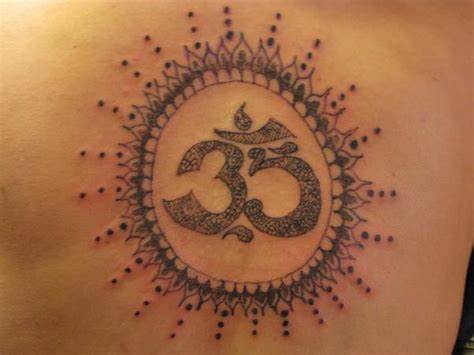 An Om tattoo is a famous symbol related to enlightenment in teaching and eastern religion. An Om is the first sound of the universe. The Om is the staple of dharmic religions, and it is often sung as the mantra. You will hear the Om (sounds more like Ohm, AUM) in all sorts of conditions, from the beginning of a yoga class to solemn religious ceremonies.

The Om symbol tattoo presence might offer the unique gateway to personal transcendence and can be powerful when paired with other eastern symbols that hold deep meanings like the Sanskrit word, Unalome tattoo, or mandala tattoo.

Read more to find an exciting collection of Om tattoo meanings and designs that will help you to align the chakra.

What Is An Om Tattoo?

The Om tattoo is a famous symbol related to enlightenment in teachings. The definition of Om is the first sound in the universe.

The Om tattoo marks the pattern of enlightened ink. This thoughtful Eastern mantra can transform into a compact calming mechanism with stylish comfort.

The Om tattoo presence might be an effective solo design, and when it is paired with other eastern symbols holding deep meaning like Sanskrit word, Unalome tattoo, and Mandala Tattoo.

What Does An Om Tattoo Symbolize?

The Om symbol is also known as the Aum symbol, as well as the Ohm symbol. It is a sacred sound that represents the sound of the universe. Om means dream state, illusion state, walking state, unconscious state, as well as the absolute state. Each part of the tattoo is sacred and has its own meaning. Here are some Om symbol meanings:-

The Om symbol itself is simple – a crisp, black picture of little fanfare. However, the rest of the designs were created with the elements of 3D dotwork tattoos and geometric styles. It is a unique tattoo that shows a great level of detail and skill. Using the idea fundamental to dharmic religions as the geometric style source can make the minimal tattoo or simple om tattoo.

The Om tattoo is put on by individuals who have started on the road towards mental clarity. The Om tattoo’s amazing powers are out of the world, and they are perceptive signifiers of love, ego, and death.

The vision core of the Om symbol is best for monks and people with related lifestyles. However, they can be drawn in vibrant, bright color designs. With meditation and yoga growing in the west, the unalome symbol or om symbol can be added to the design to make the meditation or yoga-related body art.

Mandalas are used to promote harmony and balance. This idea reaches to mandalas, becoming the spiritually connected method of the tattoo, peace, and body art. They are used often in combination with Om designs.

The mandala tattoo involves complex patterns and details enclosed within the circle. Following circles is pattern differently, and different circles have different meanings. The symbolic meanings can differ between religions, sects, regions, and the media by which they create.

The Om follows leading deities Lord Shiva and Ganesha in the Hindu religion and the god Buddha in Buddhism. The om tattoo featuring Buddha adds an extra layer of freedom, particularly since the appearance means to remove all the obstacles in the course towards enlightenment.

Use the om design as a border element for the tattoo expert to make the Buddha depiction within the Om symbols. Moreover, these designs are done in a variety of methods–they all show skill use of space and also great attention to detail in the shadow, shading, and amazing linework.

The range of the black ink om tattoo is amazing. Some of these tattoos you will find are simple designs based on the accuracy of delivery-solid, no unnecessary designs placed cleanly on the skin. Other designs like balances black ink, almost blackout arm tattoo piece, negative space, with beautiful designs of dotwork style to illustrate the Om symbol in an amazing design.

God Ganesha, the son of Lord Shiva, has an elephant face and a large body, so it is a clearly recognizable Hindu God member. The elephant head of Lord Ganesha symbolizes great wisdom, understanding, and intelligence. The belly of Lord Ganesha represents the universe.

Other Hindu tattoo designs feature the symbol as the edge part to work within; however, instead of being filled with the Buddha, they are filled with a variety of tattoo style forms, like linework, patterns, and styles like Tibetan Sanskrit word, lotus flower, or sacred symbol.

A negative space tattoo refers to the style where the majority of inking and linework is done in order to bring out the empty space to reveal the image, such as a stencil. The argument can be made with the amazing yet beautiful Om tattoos.

The search for wisdom and consciousness is helped by clearing the mind to achieve balance, which is represented by negative space in the Om tattoo. You can also go for the smart application style, which is made to emphasize the amazing style options such as stippling, dotwork, and 3D effects to create the Om symbol unique.

Om tattoo styles work well when it is delivered on different placements. The increasingly famous type of visible design is the hand tattoo, and the flowing lines of the Om symbol go pretty nicely in a limited space.

If you are not sure about the hand as the placement for the body art, then you can go for the temporary tattoo to give a tattoo design a test run. The temporary tattoo is the easiest way to test out a risky idea without any long-lasting results.

Remember, the palm of a hand is the toughest place to put the tattoo. As the skin is tough and the changes are so often, there will likely be ink drop out and the need to frequently get the tattoo to touch up to keep it looking like a piece of art.

Om tattoo is an unusual universe design. If you are a fan of amazing symbols and you want the tattoo to look mystical, then go for the Om symbol. Also, do not stop here with the om tattoo research; keep exploring the designs until you find one that suits you. If you find this information useful, drop a comment below this section.