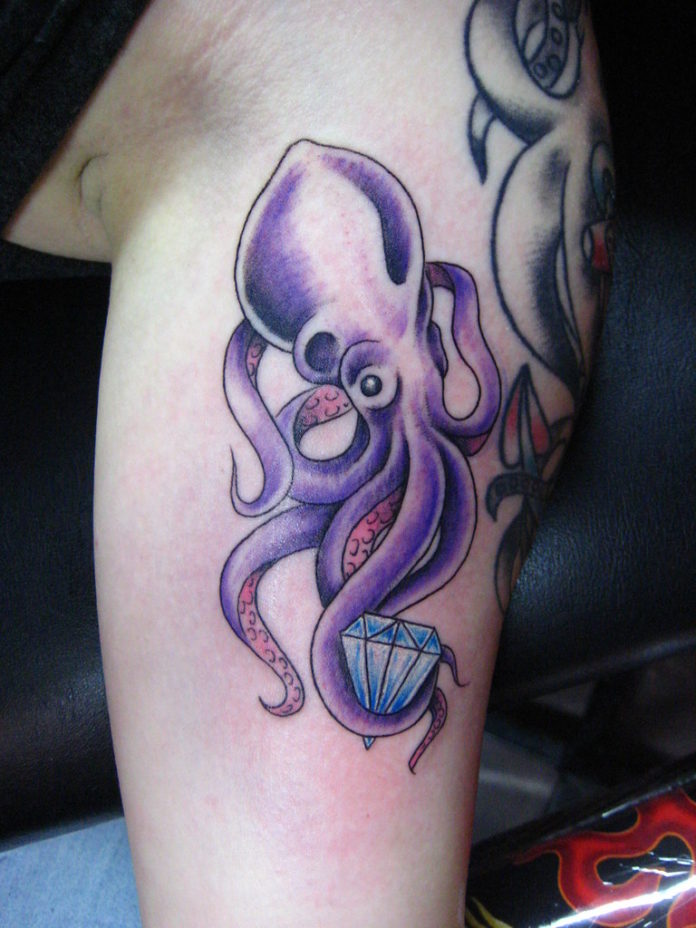 Octopus tattoo has become very famous recently with its mighty imagery, deep symbolism, and meaning. This tattoo offers great flexibility to the artist, making it a favorite design favorite among the tattoo artists.

Due to visual media like movies, games, and cartoons, we are used to seeing the two sides of an octopus. Cartoons and animations humanize the squid as a friendly and cute creature, whereas games show them as the “ world enders” and apocalyptic beast.

Octopus truly makes an eye-catching and unique tattoo design, which gives lots of scope and flexibility for placements and creativity.

If you want to know the meaning and symbolism of the octopus tattoo and would love to explore some ideas for inspiration, you have come to the right place.

An octopus tattoo may not seem like a creature with symbolism. However, like a fox is known for its cleverness and a lion for strength, an octopus presents a bit of challenge.

Below we have discussed octopus tattoo meaning and symbolism in detail.

One key meaning of an octopus tattoo is a mystery. The reason for this symbolism is that they live in the deep sea, a place where not many people will ever see. Most parts of the oceans in completely unexplored, and we associate the deep sea lives with being enigmatic and elusive.

One more reason why the octopus is associated with mystery is that they are different from all the creatures on earth. Octopus has ten arms, three blue hearts, and camouflaging skin, which is the opposite of what is there on the ground.

Octopus tattoo design expresses a fascination for the mysterious and unknown. This can also mean a drive towards exploration, learning, and the liking for unexplored and enigmatic.

Have you heard about the mythical octopus known as the Kraken? In Scandinavian folklore, Kraken is a legendary giant octopus that dwells in the waters of the Norway coast and in Greenland. It used to terrorize the sailors with the threat of pulling their ships under the ocean.

You can spot the Kraken octopus tattoo design with its arms wrapped around the ship, and it symbolizes the unknown, legend, and mystery.

Read More:- Fall in Love with Every Inch of Yourself With These Self Tattoo Ideas

Most octopus breeds do not have a skeleton or any kind of protective shells, which is why they have a squishy soft body. This allows them to easily squeeze through the holes and cracks, which may seem too small for them to pass through.

Octopuses are also known to develop impressively defensive and offensive techniques to elude predators and hunt.  Some octopus species have venomous saliva and can shoot out dark colo ink bursts when they are threatened to confuse the attackers.

These characteristics of an octopus are a symbolism of adaptability. Getting an octopus tattoo can represent the meaning that you are tough, adaptable, have the ability to cope with different situations.

Although this may sound like a lie, octopuses are strong creatures that can survive and withstand extensive damage. This is why an octopus tattoo design can have the meaning of resilience. They live in a kind of environment in which humans cannot survive for even a short span.

Did you know that an octopus can regrow its lost arm? This means when their defensive techniques and strength fail, they can overcome major injuries. This can symbolize that you can overcome setbacks and obstacles in your life.

An octopus tattoo is a representation of growth. As we know, the octopus is a large sea creature that can easily squeeze through small cracks. When they pass through small holes, it looks as if they are expanding in a seemingly impossible way.  Combines with their ability to regrow lost arms, this creates a link with the growth.

Octopuses have been long featured in Minoan Civilization’s art- inhabiting the Aegean Islands and Crete during the Bronze age. Octopus designs can be seen on the Minoan vases and bowls, which depicts this creature’s unfurling arms.

For the Minoans, octopuses were a symbol of the expansion and growth of the Universe. An octopus tattoo design with unfurling arms can also mean personal growth.

An octopus has eight long tentacles (arms) that are capable of doing their individual things independent of others. This creates a symbolism between an octopus and control. The long arms going in different directions doing their independent things suggest control and influence over others.

Though 3D tattoo has come into trend recently, they have become popular with quite a fascinating speed. Experienced tattoo artists use shading to create an illusion of perspective and depth, creating full photorealism.

3D octopus tattoo design will look great in both grayscale and colors; however, you will need a bigger body area for the required amount of space. This tattoo pattern is not that easy to get right, so the artist will need a bigger space to work on.

When choosing your tattoo artists, be very careful, especially when planning to ink a 3D tattoo. Even the smallest mistake will ruin the visual illusion effect and is not easy to correct later. Pick a tattoo artist with experience in this particular style of tattoo.

Tribal tattoos are gaining popularity these days, with more and more designs being inspired by the tattoos of tribal cultures.  Octopuses are the legends of the Polynesian tribe’s mythology about commerce, migration, and family connections. There is a good old tale about octopus unifying Polynesia, connecting the Plynesian triangles with its long arms.

Tribal tattoos can be easily customized in terms of their meanings. An octopus tattoo, Polynesian, when combined with various patterns and symbols, can depict a personalized meaning.

For example, in Polynesian tattoo art, a linear pattern of spearheads interlocking is a symbol of courage and strength. In contrast, a shark’s teeth are a symbol of adaptability and protection.

Octopus tribal design is a popular choice for a shoulder tattoo. The main reason behind this is that the upper arm and shoulder constitute a popular tribal tattoo location in general because it supports the flow of designs.

If you want a tattoo with a more sophisticated and modern look, then opt for designs with a detailed outline and a realistic-looking octopus. The outlines will be done with dark black ink and varying line thickness, which makes it appear like a Victorian-era sketch.

If you want a small octopus on your forearm or hand, then this tattoo design is suitable for you. When done in a large space, the bigger tattoo will look modern and minimal as well because of the lack of color filling.  When done on small spaces, the outlining technique will yield a clear looking design.

Watercolor tattoos mimic the look and vibe of a watercolor painting, which complements the black outline for defining. This will result in a very interesting fusion of abstraction and realism using vibrant colors, giving a light look.

The particular color scheme will be decided by you and your tattoo artist, although bright colors work best in general for watercolor techniques. Gentle and light tones make the tattoos appear faded after some point and may not age as well, like the vivid colors.

Anchor and octopus make a very obvious pairing, as they both are associated with sailing and sea depths. This combination of these elements often results in very aesthetic choices. In most of these anchor and octopus tattoo designs, the arms of the octopus wrap the anchor.

This octopus anchor tattoo has various meaning, it can be a symbol of a stable person, steadfast, confident self-image, it and true to their own values. It is also a representation of safety as it prevents the sailing sea from getting lost and swept by the sea waves.

Like we discussed earlier, the Karen, a monster of the Scandinavian myth, used to threaten to drag the ship to the bottom of the sea. Since Karen is a mythical octopus, it is meant to have some distinguishable elements in the design. This will make the Karen different from a regular octopus tattoo.

A completely rigged ship is the best choice, with a huge Kraken wrapping their arm around it or just laying under the water surface right below the vessel. This design is fairly complex and has intricate patterns, even when done in an outline style. You will need a large space to get inked with this design. The popular placement for this Kren octopus design is a chest, back, or thigh tattoo.

For a very light-hearted and unique look, pick a cartoon-style octopus design is best. Usually, traditional tattoos are done with solid color and black outlining. However, a cartoon version will symbolize a friendlier version of this sea creature,s which will look cute.

One great advantage of this tattoo idea is its scalability. The design will be less intricate and simpler as compared to a real octopus. This will also make an apt small octopus tattoo for your neck or behind the ear.

Octopus arm tattoos look astonishing. With an amusing and ironic feel, this tattoo design involves a tattoo of an octopus going down the person’s arm length, which is a part of the large sleeve tattoo. Some people only prefer an arm tattoo, while other people like to extend that tattoo to their back where the remaining tattoo design is depicted.

Follow a general rule of thumb when it comes to the placement of octopus designs. The more detailed is the tattoo design you pick, the larger body area it will require to be inked.  This is because when you plan a tattoo, you need to take into consideration not how it is going to look now but also after some years down the line.

When very intricate or detailed designs are scaled down to a small tattoo, the tattoo’s individual lines end up running too close to each other.  As time passes by, the tattoo will lose its definition and crispness, and the lines will get blur. When they are too close, the lines may blend into one another and distort the entire image.

For large octopus designs, consider areas like the chest, back, ribs, stomach, or thigh for the tattoo placement. Depending on the design, you can also get a tattoo as a half-sleeve or sleeve length tattoo. Medium-sized octopus designs can be inked as an arm, calf, and neck tattoo if you don’t mind it wrapping your entire neck.

Some popular placements for small octopus tattoo include foot, wrist, and even the finger and ear is an apt body area for the smallest designs,

Octopus tattoo design is becoming fairly popular around the world. It has several meanings which can change depending on other elements used in the tattoo design and personal symbolism. If you are looking for eye-catching designs to cover a large body area, check out these octopus tattoo ideas.