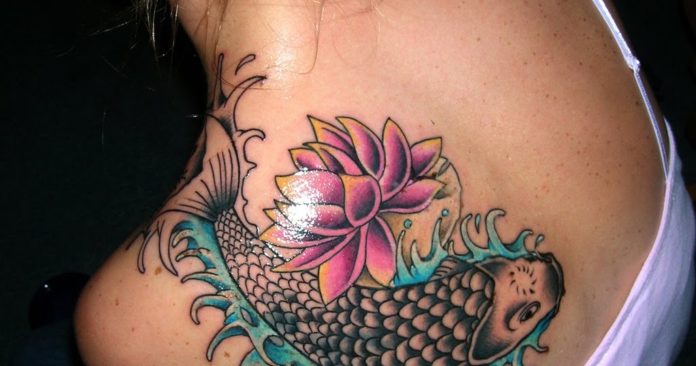 With mesmerizing colors and eye-catching designs, koi fish tattoo has become a popular choice in the tattoo world. Koi fish- the marine creature is a lot more than just a beautifully colored fish that we enjoy looking at. Koi fish is a strong symbol of perseverance, the strength of character, courage, and accomplishment. Here is an article with all you need to know about koi fish tattoo meaning, symbolism, and popular koi fish tattoo designs.

Though koi fish is a significant part of Japanese culture and traditional Japanese tattoo, it originally came from China. Koi fish is a type of carp, and the word “koi” is the Japanese word for the same. The fish was brought from China to Japan, and it flourished there, With time passing on, koi fish was bred in Japan to create different brightly colored spices popular today.

According to some research studies, koi fish we find in today’s ponds actually date back to the early time of the 19th century. During this time, the colorful fish carp were kept and bred in Japan by the rice farmers.

Now the question is how koi fish became such a popular symbol of strength? There is interesting folklore why koi fish is considered a symbol of the strength of character and perseverance. The symbolism is due to one koi fish that stayed strong and refused to give up during hard times and even the mocking of demons.

According to folklore, once a school of koi was swimming against the water current along a stream. They reached a waterfall at the end of the stream. It was a seemingly challenging and impossible obstacle to overcome, so the school turned back. But one brave koi refused to return.

It continued the attempts for 100 years in order to reach the top of the waterfall. The koi kept falling back, and it was even mocked by demons who were fascinated by its efforts. But the koi did not give up.

The koi continued teh attempts leaping from the death of the river to reach the top of the waterfall. Finally, after a century of effort, it finally reached the top. In order to recognize its determination and perseverance, the gods turned the koi into a big golden dragon, which is an image of strength and power.

Due to its perseverance in the tough times and during the race of demons, the koi fish gained the reputation of courageousness. Now that you know the reason for koi fish symbolism, you will better understand the koi fish tattoo meaning.

On the other hand, a blue koi fish tattoo represents serenity and peace. In addition to this, a blue koi fish is also associated with fertility and masculinity. Therefore it is one of the popular animal tattoos for men.

Another popular choice for koi fish tattoo is the red koi tattoo, which holds a wide range of meanings from bravery to motherhood to passionate love. If you do not want a colorful koi tattoo, you can also get it in black color. The black koi fish tattoo meaning is associated with strength and adversity. It is the best choice for people who have overcome hardship, whether that be difficult relationships or depression.

The koi fish tattoo meaning is not only impacted by the colors but also the way where it is heading. There are different meanings behind the direction in which you get the koi tattoo. For instance, if your fish is portrayed swimming upstreams. It means you are currently struggling or fighting obstacles, but you have courage, and you won’t give up.

If your koi fish is swimming downwards, it could represent that you lack the strength to fight against the obstacle. On the other hand, it could also symbolize that you have attained your goals and no longer have to fight the obstacles.

Koi-fish tattoo is also a popular choice when it comes to dragon tattoos. Dragon koi tattoo is profoundly famous among people who love to get dragon tattoos with deep meaning and symbolism. Keep in mind that the color of the tattoo and tattoo placement plays an essential role in symbolism.

When it comes to popular growth tattoos to celebrate the beautiful journey of life, koi traditional Japanese koi fish tattoo is the right pick. In Japan, koi fish is associated with good luck and prosperity. Moreover, it is also a symbol of perseverance and determination. If you value these qualities in life, then this one is the right tattoo for you.

Traditional Japanese tattoos, also known as Irezumi, have a different look. They are popular for their vibrant colors and bold lines. Japanese tattoos include different images like dragons, tigers, and koi. Trust me; the Japanese koi fish tattoo is one of the best tattoo designs if you want something unique.

If you want a tattoo that you can cover up easily whenever you want, then you should opt for minimalist tattoo ideas. These tattoos are simple, elegant, and are the right choice if you are getting inked for the first time. Small tattoos are popular among both men and women due to less pain and versatility.

Yin yang tattoos are a perfect choice to symbolize unity in opposites. Koi fish has greater value in Japan, and with the right coloring, a koi fish tattoo can make you stand out from the crowd. Koi fish meaning is associated with fortune and good luck. A koi fish yin yang tattoo has remarkable symbolism. It represents perseverance and abundance. This koi fish tattoo design is perfect for reflecting balance and harmony.

Lotus flower tattoos have higher significance in different cultures. The charming and appealing beauty of a lotus flower is associated with intrinsic symmetry. A lotus flower tattoo represents purity, perfection, and spiritual enlightenment. When combined with a koi tattoo, it forms a unique tattoo design with deep symbolism.

The combination of koi and lotus tattoos creates an attractive and powerful tattoo. Joining them both in a single design signifies growth and optimism. It is a perfect pick for someone who has struggled a lot in the past and has gained strength from it.

If you are fond of Japanese culture and heritage, then you may love the cherry blossom and koi fish tattoo. Both these elements have a higher importance in Japanese culture. Cherry blossoms are often associated with existence and beauty. They are a reminder of how fleeting our life can be. On the other hand, a koi fish represents prosperity and luck.

When these two elements are combined in a single tattoo design, it forms a strong symbolism. It is a bold and visually appealing body ink option.

As mentioned before, colors play a vital role in the koi fish tattoo meaning and symbolism. Koi fishes have been bred to have various colors, and each shade has a different meaning. If you do not want a colorful tattoo, then you can get a black koi fish tattoo. A black koi fish is associated with strength and adversity.

When getting a koi fish tattoo, make sure to pick the right color. The rich symbolism makes a koi tattoo deeply personal. Choose a visible spot so that you can remind yourself of the meaning of this amazing self-love tattoo.

The color of the tattoo plays a vital role in koi fish tattoo meaning. People who value courage and bravery should get a red koi fish tattoo as it is typically associated with these qualities. This is not the only meaning of the red koi fish tattoo; it is also related to motherhood, strength, and intense love. The boldness of this tattoo design will make you fall in love with it.

Koi fish is also popular among zodiac tattoos. The logo of two koi, swimming in opposite directions, is the symbol for Pisces. Considering the rich symbolism and koi fish tattoo meaning, it makes an amazing choice for people with Pisces zodiac signs. This koi tattoo can be associated with duality and can be related to anything torn between two directions.

Koi dragon is related to the ancient folklore of a koi fish transforming to the mythological golden dragon. The god turned koi into dragons as they were impressed by its strength, courage, and strong determination. This legendary creature is considered a symbol of wisdom, strength, and power. When koi fish and dragon are combined in a tattoo, it symbolizes transformation.

If you believe in the idea that everything in life is a pull and push, and we need something to create a balance, then tow koi fish tattoo design is the best pick for you. The design includes two koi fish swimming in opposite directions. They represent the opposite forces. One popular choice for two koi fish tattoos would be one white koi and another black. The tattoo is simple but holds a deep meaning. It represents unity in opposites.

If you want something appealing and unique, then koi fish tattoo design is right for you. The design is not only amazing but also has deep meaning. A koi fish tattoo meaning is often associated with strength, courage, and strong determination. If you appreciate these qualities, the koi fish tattoo is the one for you. Tell us what a koi fish represents for you by dropping a comment.