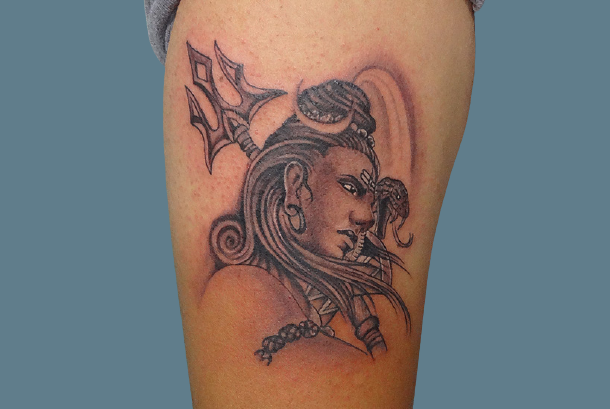 Hindu religion is one of the oldest known religions in the world. It originated in India and is the third-largest religion worldwide. Hindu religion includes worshiping different gods, goddesses, and diesters. It has given rise to unique, beautiful, and incredible imagery. If you are charmed by the Hindu religion, then Hindu tattoos designs are the best choice for you.

One of the most beautiful aspects of the Hindu religion is the mesmerizing imagery that is present in the religion. Bright, colorful rendering of different gods worshiped in Hinduism appears in beautiful sculptures, paintings, and enriched religious texts. In addition to this, various Hindu symbols are also present in the religious texts. All these collectively make for an iconic tattoo for people who believe in following the Hindu way of life. Continue reading the article to know more about the best Hindu tattoos designs, ideas, and their meanings.

Hindu tattoos designs are one of the best traditional style tattoos with a long and inspiring history behind them. These tattoo ideas include a wide range of designs of Hindu gods, goddesses, deities, and symbols. Below mentioned are some of the best Hindu tattoo designs and their meanings.

People who follow Hinduism are highly devoted to Lord Ganesha. He is one of the most popular and worshiped gods in the Hindu religion. In Hinduism, people worship Ganesha before starting any new work to seek his blessings for the success of work. Moreover, he is believed to bring good luck, which is also the reason for worsening before initiating any new work.

Ganesha clears the obstacles and makes way for his devotees to move forward successfully in life. In addition to this, Ganesha is also representative of wisdom, arts, and the pursuit of knowledge. If you are looking for Hindu tattoo designs, then a Ganesha tattoo is just the perfect choice. It represents a fresh start and is also a symbol of good fortune.

Lord Shiva is another one of the most worshiped Hindu Gods. Moreover, the Shiva tattoo is also a popular Hindu tattoo choice. Shiva is considered the Supreme Being. He is the destroyer as well as the transformer. He has various forms, including aggressive and calm. Moreover, he is also known as Mahadeva, which means the Supreme God.

Lord Shiva is one of the unique Gods as he represents both good and evil. He is believed to destroy the negative energy in us and let the positive energy flow within all of us. Shiva tattoos are a representation of a destroyer, creator, and preserver.

The symbolism of the Shiva tattoo is highly strong, which makes it one of the most popular Hindu tattoos choice. You can either get a Shiva portrait or chants inked on your body. Moreover, you can also get word tattoos of Shiva, Mahakal, or Bholenath. In order to make the word tattoo more interesting, you can add symbols like Trishul (trident), damru (two-headed drum), or rudraksha. All these are divine symbols of Lord Shiva.

Lord Vishnu is also believed to be a rescuer, preserver, and savior of humanity. He is a strong link between creation and destruction. If you want Hindu god tattoo designs, then a Lord Vishnu tattoo is also an amazing choice. It is a perfect design for people who are spiritually and religiously invested.

Om is one of the most divine symbols of Hinduism, Jainism, and Buddhism. Though it is written as OM, the actual sound is AUM. It is considered the first sound of the Universe. In addition to this, Om also symbolizes the ultimate reality.

If you are charmed by the Hindu religion, then an Om tattoo is a perfect choice for religious tattoos. This amazing Hindu tattoos are a symbol of timeless awareness and sacred awareness. It is not essential to get a big Om tattoo; you can also get a minimalist tattoo of Om to make a strong style statement.

Iconic Hindu goddesses tattoos are also a popular tattoo choice when it comes to Hindu tattoos or religious tattoos. Goddess Durga is one of the most popular and important parts of the Hindu faith and mythology. She is also known as Maa Durge (mother Durga). Goddess Durga represents divine energy. Goddess Durga is feminine energy who is accountable for managing the world’s balance.

She is often portrayed with various weapons in her hands, which shows that she protects her devotees from evil. Durga is also the warrior goddess; however, she is also a caring maternal figure. If you want to show your belief and devotion to divine energy, then the Durga tattoo is a perfect choice for you.

Goddess Lakshmi is the goddess of good fortune, wealth, spiritual, and material prosperity. She is the wife of God Vishnu and is popularly worshiped in the Hindu religion. Lakshmi is also the divine energy. It is believed that there are eight different forms of Lakshmi, which shows eight types of wealth and prosperity. She is believed to maintain human life filled with peace and justice.

Goddess Lakshmi is portrayed sitting on the lotus flower and holding one in hand. A Lakshmi tattoo is one of the best religious tattoos or Hindu tattoos. It represents prosperity, wealth, and good fortune.

Kali is another most worshiped Hindu goddess. She is considered the goddess of creation, destruction, time, and power. Kali is the divine protector as she battles against evil. Moreover, she also represents violence, destruction, and death. She can not be defined as “good” or “bad” as she exists far away from the limitations of the human mind.

Kali is depicted as jet-black, which is a symbolism of night that swallows every existence. She is often portrayed naked, wearing snakes and a garland of skulls. One of the most popular and recognizable features of Kali is her blood-red tongue that sticks out through her sharp fangs.

Goddess Saraswati is a deity of knowledge, speech, and wisdom. She is the patron of music, philosophy, arts, learning, and creativity. Saraswati is depicted as a woman dressed in white and seated on a white lotus; it symbolizes truth, knowledge, and light. Moreover, she is shown playing the veena and dressed in a beautiful white and gold saree.

Saraswati embodies the knowledge and the experience of ultimate reality. She often sits on a lotus or white swan. Some symbols of Goddess Saraswati include lotus, white color, veena, and books. If you love arts, then a Sarawati tattoo is a perfect Hindu tattoo choice for you as she is the goddess of music, art, and learning.

Krishna is one of the most popular and widely revered of all the Indian gods and divinities. He is one of the eight incarnations of avatars of Lord Vishnu and is also a supreme god. Krishna tattoo is one of the popular choices among his devotees and followers. He is often portrayed with blue color skin with a peacock feather on his head and flute in hand.

If you are a Krishna devotee, then a flute or a peacock feather is also an amazing religious tattoo choice. In Hindu mythology, the peacock is considered one of the most spiritual and auspicious choices. Lord Krishna is portrayed wearing a peacock feather on his head. It is believed that a peacock feather brings prosperity and good luck.

Krishna is often portrayed holding a flute in his hand. So, it is another popular religious tattoo when it comes to Hindu tattoos. You can either get a simple flute tattoo or can also get a tattoo including both peacock feather and flute. It is one of the best and unique tattoo choices that will make you stand out in the crowd.

When it comes to Hindu tattoos or religious tattoos, there are a plethora of options. In this regard, the Ram tattoo is one of the most popular and thoughtful choices. He is a popular Hindu god who is a strong symbol.

Shri Ramchandra is also one of the incarnations of Lord Vishnu. He is also portrayed in blue or pale skin. He is known for his incredible compassion, bravery, and devotion to religious duties. In addition to this, he is also depicted as holding a bow and arrow. If you want something unique, then the Ram tattoo is the right choice. It depicts someone who preaches truthfulness. Ram tattoo symbolizes good virtue.

In the Hindu religion, Nandi is considered the beloved mount and chief disciple of Lord Shiva. He is the embodiment of surrender and acceptance of the divine and is the main symbol of Shiva. The name Nandi means joy or happiness. Due to which it is believed that the Nandi tattoo brings contentment and good fortune.

Nandi is a half-man and half bull. Nandi tattoo is not the most popular choice, but a perfectly made tattoo design with an Om symbol in it looks highly amazing.

The Lotus flower is considered one of the most sacred symbols of the Hindu religion. The flower grows from the mud but is a sacred flower. It is associated with enlightenment, beauty, and purity. The Lotus flower is also related to the Buddhist religion and is a perfect choice to present intelligence, mindfulness, and spirituality.

The most popular tattoo style for Hindu tattoos is the Old school. It features bold outlines and beautiful simple colors. You can also get Hindu tattoos of Hindu god tattoos in watercolor tattoo style. This tattoo is attaining remarkable popularity as it provides an eye-catching and unique tattoo design.

You can get watercolor tattoos in different styles, but the most popular idea is with black bases and beautiful colors. A black baseline helps to form a strong foundation for the watercolor tattoo. This style is a perfect choice for the representation of Gods in Hindu gods tattoo.

If you want a unique Hindu tattoo, then you can opt for an Om tattoo or a lotus tattoo. No matter which tattoo designs you choose, it is essential to get it on the right tattoo spot. Make sure to check tattoo placement ideas to get the tattoo in the right spot. You can get Hindu tattoos of Hindu god tattoos on your chest, hands, arms, shoulders, or upper arms.