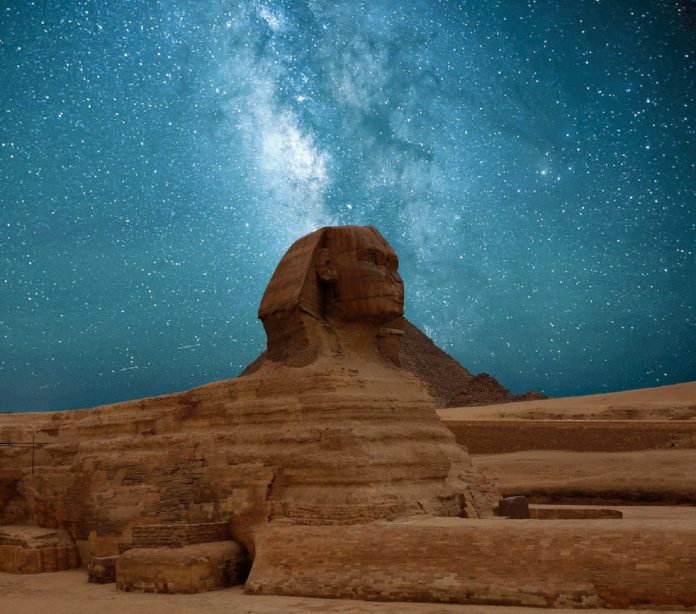 Egyptian symbols tattoos have been popular since forever due to their symbolic meaning and ornate design. Getting ancient Egyptian symbols inked will definitely attract a lot of attention. Do you want to know why?

The primary reason is that the Egyptian inspired tattoos have an eye-catching design and have significant meaning linked to old Egypt based mythologies. The mythology is loaded with various gods, and goddesses, creatures, and varied symbols.

We are here to help you dive into the divide and mesmerizing world of ancient Egyptian symbols and tattoos.

Types of Egyptian Symbols and Tattoos:

Ankh is one of the most popular Egyptian tattoo symbols. This symbol is for both men and women and represents eternal life. Ankh tattoo also symbolizes the union of male and female energy. It was believed that Isis and Osiris’ union brought a flood to the Nile river to bring fertility to Egypt. This is one of the reasons why Ankh is also known as the Key of Life or the Key of the Nile.

Ankh is a symbol of hope for eternal life. In ancient times even the Egyptian slaves used to wear a wooden Ankh symbol around the neck in the hope of eternal life after death.

Because the design of this symbol resembles female reproductive organs, people also believe that the Ankh crown symbolizes the womb, the stems as fallopian tubes, and the shaft is the representation of the birth canal.

The Eye Of Horus

Also known as the Egyptian eye tattoo, Eye Of Horus is an ancient Egyptian symbol tattoo. This symbol represents healing, good health, royal power, and protection from evil spirits. The sailors in ancient times often used to paint the Eye on their boat for protection. Egyptian eye tattoo is a symbol of healing, sacrifice, protection, security, safety, and restoration. Eye of Horus is an iconic symbol that can also be spotted in modern pop culture, for example, in Katy Perry music videos, celebrity necklace, etc

Sphinx of Giza is the largest monolithic statue worldwide. People believe that the Sphinx was built by ancient Egyptians in the kingdom of Pharaoh Khafra 4000 years ago. A Sphinx tattoo is a symbol of protection. Sphinx was a mythological creature during the Persian and Greek Egyptian legend. It had the head of a human and the body of a lion. It was considered the guardian of the temples, so you can still see statues of Sphinx guarding important monuments like temples and tombs.

This is another popular Egyptian symbols of tattoos. Hieroglyphics is one of the oldest writing systems in the world. In this people used to use pictures instead of letters and till today people find this writing style intriguing and pleasing. Hieroglyphics carries a mystery in such a way that even a simple anime would like an interesting tattoo design.

We all know about the Great Pyramids of Giza, one of the seven wonders of the world. Pyramids are huge tombs. The Pharaohs believed that death is the extended journey to eternal life, and becoming alive in a new world required finding the older body.

This is the reason why ancient Egyptians used to protect and preserve the body of their deceased members. Pyramids are a symbol of protection and strength and also a stairway to heaven.

Even though the Pyramid tattoos are not fairly popular, they are still interesting. You can incorporate various Egyptian symbols in the image of a Pyramid and create a unique tattoo.

The stories and powers of the Egyptian gods and goddesses reflect deep meanings in their tattoos. Check out the popular Egyptian gods tattoo ideas:

As per ancient Egyptian mythology, Osiris is the god of the underworld, resurrection, and judge of the dead. He was the son of Geb (earth god) and Nut (sky goddess).

Osiris is a Latinized Egyptian name evolving from the word “User,” meaning mighty or powerful. Osiris was also worshipped as the god of vegetation, fertility, and sprouting.

In ancient Egyptian times, people believed that when a person dies, they are brought for judgment in front of Osiris. This is one of the main reasons people get Osiris tattoos to show him respect as the afterlife’s mighty god.

Isis is the Egyptian goddess of fertility, magic, and motherhood. She was a protective goddess and used her magic spells to help the needy people. Isis was the mother of Horus and wife of Osiris.

As each of the pharaohs was regarded as the living Horus, Isis was considered as the protector and mother of Pharaohs. She has winged arms and bowing under the moons. People consider Isis as the goddess of marriage, health, and wisdom.

One of the most significant Egyptian gods tattoo is Horus. Horus was the son of Isis and Osiris. As per Egyptian mythology, Horus is considered the god of war and the sky. He is mostly featured with a falcon, like a man with a falcon head or peregrine falcon or a lanner falcon. Horus is known as the protector of all the rulers of Egypt.

One cannot neglect Anubhis when talking about Egyptian symbols tattoos. Anubis is one of the most recognizable gods of the temples in Egypt and is known as the god of mummification and embalming.

The first-ever Anubis was found in the ancient texts of the old ancient kingdom. He was known as the protector and guardian of the dead. He is mostly depicted as the image of Jackal’s head on a man’s body.

Anubis is also regarded as the keeper of the scale in the underworld. He decides the dead’s soul’s final destination by measuring their hearts giants the maat (TRUTH).

There are several gods and goddesses in ancient Egyptian mythology, and their depiction kept on changing over time. Bastet is one such example. She is known as the goddess of cats, and her original name was Bass.

In the early depictions, Bastet was shown as a woman with the head of a lion; she was Ra’s daughter. Over time the physical appearance of Bastet was changed to a domestic cat from a lion, and she became the goddess of childbirth, cats, fertility, and home.

As the cats are regarded as the protector of homes in Egyptian mythology, you can find images of Bastet in houses to keep away diseases and evil spirits from children and women.

This is one of the reasons why Bastet tattoos are quite popular among women as a symbol of protection.

Below we have mentioned some of the popular Egyptian King and Queen symbols Tattoos.

A popular ancient Egyptian tattoo is of King Tut or Tutankhamun, the most famous Pharaohs of modern times. He became a king at the mere age of 9 and died at the age of 19. His body was later buried in the valley of kings.

Nefertiti is the fascinating Egyptian rule in history. She was a queen and also a priestess. Nefertiti is famous for its power, progress, and feminine beauty.

Undoubtedly Cleopatra is the most popular queen of ancient Egypt. She is also very famous and the most powerful ruler in the history of Egypt. Cleopatra always used to claim to be the goddess Isis herself. Cleopatra was admired for her beauty and fluency in more than seven languages, including Greek and Egyptian. She also possessed the knowledge of physics, mathematics, and philosophy.

In Egypt, cats were given extreme importance and were also worshipped in ancient times. People believed that the cats were sacred animals with magical powers, and keeping them in the home will bring good luck and protect them from evil. Egyptian cat tattoo is mostly popular among women, and it symbolizes motherhood and fertility.

Uraeus Cobra is a symbol of deity, royalty, sovereignty, and authority in ancient Egypt. It was considered as the symbol of goddess Wadjet, one of the oldest deities. The Pharaohs used to wear the Uraeus as jewelry to symbolize the power and authority of gods. Ancient Egyptian people believed that the Uraeus used to give magical powers to protect the wearer.

The scarab beetle is an important Egyptian symbol for tattoos of ancient Egyptian culture. It was linked to an old Egyptian god Khepri and was the manifestation of the sun god “Ra.” Scarab tattoo represents sun, resurrection, and recreation of life.

Egyptian symbols have a mysterious yet fascinating history. Before you get Egyptian symbols tattoos, make sure you know everything about the symbolism and the deep meaning of the ancient Egyptian tattoo. You can double-check whether a particular symbol truly represents what you want to convey because it is a lifelong commitment. Share your views about the Egyptian tattoos in the comments below.