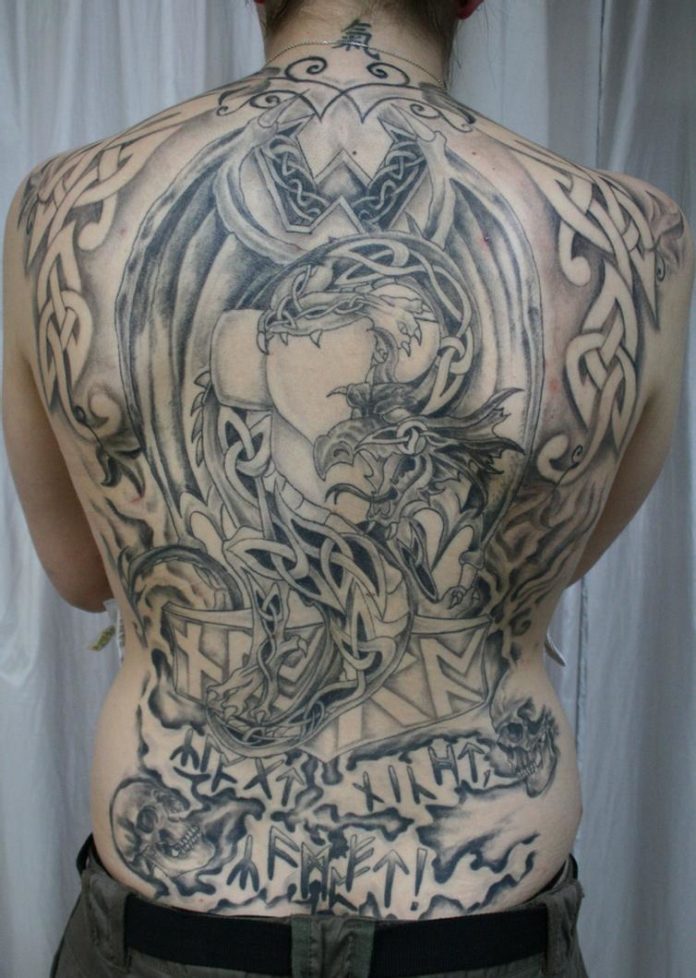 Thinking of getting yourself inked? Or Want a tattoo that is fascinating and has a meaning? The answer to all these questions is the Celtic tattoos. Yes, Celtic tattoos are perfect if you are looking to get inked with a tattoo that has symbolic meaning along with being astonishing in looks.

The symbolic value of Celtic tattoos has a history attached to it, as the warriors in the iron age used to get them to mark their own passion for their own bodies along with intimidating their enemies.

The warriors found this tactic of Celtic tattoos very effective, and thus they came to popularity.

These tattoos also showed that a warrior battled among the Celtics, which was considered one of the highest honors of the age. The Celtic tattoo history is something that will fascinate you to get these tattoos.

The Celtic warriors, along with getting the intimidating tattoos, generally went to battle with minimum clothes.

This tactic of minimum clothes and tattoos was generally confusing to their enemies, which favored the Celtic warriors.

The warriors other than tattoos also used to get their hairs colored in bright colors with fashioning the hairs in mohawk styles.

All these tactics of the Celtics made them intimidating and confusing at the same time for the enemy; thus, the Celtic tattoos got their popularity with time.

So if you are a warrior of modern lifestyle battling the everyday city life, then the Celtic tattoos are something that you will love.

In the article below, we have put together some of the best Celtic tattoo design ideas along with their meaning, which you try to stand out of the crowd.

When we talk about one of the most popular and famous Celtic designs, the knot tattoo tops the list. It is also the most preferred Celtic sleeve tattoo, which people prefer for its eye-catching design.

The Celtic knot meaning is something that will inspire you to get the Celtic knot tattoo right away. The knots in the Celtic tattoo are like an endless loop with no finish or start.

This is a never-ending loop of knots in this tattoo signifies the eternity of things like loyalty, friendship, love, and faith, which were some important parts of Celtic warriors’ life.

The knot meaning in the Celtic tattoos also comes from the single thread pattern.

In making the Celtic knots, a single thread is used; it signifies that the life eternity and life are interconnected. Thus inspires the warriors to dedicate themselves to the goal fearlessly and detach from worldly things.

What makes it amazing is the color and pattern of this tattoo. This tattoo has a knot pattern design carved in a black color, which makes it an eye catching and gorgeous Celtic sleeve tattoo to get inked with.

Celtic bird tattoos are exceptionally beautiful tattoos that you can get. These Celtic tattoos are complex in comparison to simple flowers or other curve tattoos, which makes them look impressive.

The bird tattoos hold celestial importance and are more common among females. What makes the bird Celtic tattoos stand out from others is that it looks amazing on any part of the body.

You can get it as a Celtic sleeve tattoo, leg tattoo, waist tattoo, anywhere you like.

The significance of this Celtic tattoo is that the birds meant a higher existence. The Celtics believed that they were flying superior skies and were guarded by a superior being.

The cross Celtic tattoo holds a religious significance, as people get it to express their religious affiliation.

In the Celtic cross tattoo, a cross is set in mid, and knots or curves are entwined around the cross in the middle.

The design of a cross Celtic tattoo is done normally in white and black ink, but if you want to add something more, you can also use different colors for it.

This Celtic tattoo is one of the most significant and eye-catching tattoos which you can get to express your religious beliefs as well as have something to flaunt.

The word triquetra in the Celtic tattoos comes from a Latin word, which means three-cornered.

The three-cornered pattern is one of the popular and meaningful Celtic designs as the three corners of this tattoo signifies different meanings like cosmos, one’s being-ness, spirit, or nature.

The trinity representation of the triquetra with the circle is not commonly used, and it signifies the different phases of the sun and moon.

Its three corners along the phases signify that the lunar goddess of the Celtics, which represents the female spirit and beauty.

The fishes dive deep inside the sea and leave the people far behind on the lands.

Thus the fish Celtic tattoos portray the greater levels and the depth of the contemplation. This tells that the person who has it holds a deeper understanding and is not easily intimidated by anything.

The fish Celtic designs are an amazing option if you want to have something meaningful for your hands. It is a eye catching Celtic sleeve tattoo which you can get. These tattoos also express perfection and brilliance.

The butterflies signify a sense of happiness and wonder. To better understand the butterfly Celtic tattoo, you can say that it’s like the idiom “Social Butterfly.” This idiom expresses the importance of this Celtic tattoo well. It says that the person with this tattoo is free-spirited and not bound by the rules of society.

This design is an attractive option in itself, but you can also go for some colors and modifications to make it even more eye catching.

This type of quaternary Celtic tattoo is popular and widely done on the legs. Other than this you can get it anywhere you like as it is not too big in size.

The four corners of this tattoo signify one important thing. These corners tell us about the four universal elements which our body is made up of.

These four elements include air, earth, water, and fire. You can also get such Celtic tattoos if you want to express your love for nature.

These Celtic tattoos are perfect for females who want to have something expressing women’s power.

Such Celtic tattoos exemplify the strength and power that a person gains by the alteration of the growth, change and new beginning. Thus the meaning of this tattoo has a deep significance.

However, people generally get this tattoo without even realizing the true meanings and implications of this Celtic tattoo design.

To make it even more eye-catching, this tattoo is also made in 3D effect, which gives it a life-like appealing and novel look.

The tribal tattoos use many kinds of symbols and knots in their designs. These tattoos are bewilderingly eye-catching and gorgeous to look at. These Celtic designs express the various distinctive natural elements like the moon, sun, and air. The side Celtic tattoos also express the heritage and culture of the tribal.

These Celtic designs are also Celtic symbols for strength, chieftain qualities, and valor, thus popular among people with warrior spirits.

However, the truth about these tattoos is that there are abundant types available when it comes to the Celtic tattoo designs for males.

One good thing is that these can be expanded and made more expressive using Celtic designs and lines.

The design of the tree tattoo symbolizes the kinship with deep roots that can’t be uprooted easily. Thus it is perfect for people who are dedicated and stable and can’t be diverted easily.

The shield and compass Celtic tattoos are perfect examples of how a good artist can make the most eye-catching designs with the simple knots and lines.

The shield and compass design are perfect for men when it comes to expressing power. These tattoos are an astoundingly beautiful Celtic sleeve tattoo option for men.

The shield and compass in this design signify the wanderlust of a person along with acting as a Celtic symbol for strength.

The compass signifies wanderlust, whereas the shield in it expresses the protective and intimidating nature of the person.

The Celtic tattoos have complex meanings behind them, like the complex eye catching designs they carry. Celtic tattoos with the significance of a life with no start or end fiercely intimidate the enemies on the battlefield. The knots and lines of the Celtic tattoos make it an amazing tattoo options which you can get to express different things like strength, feminine power, and more.

What are your thoughts on Celtic tattoos? Do you want to get one after reading the article? Please do let us know in the comment box about your thoughts.