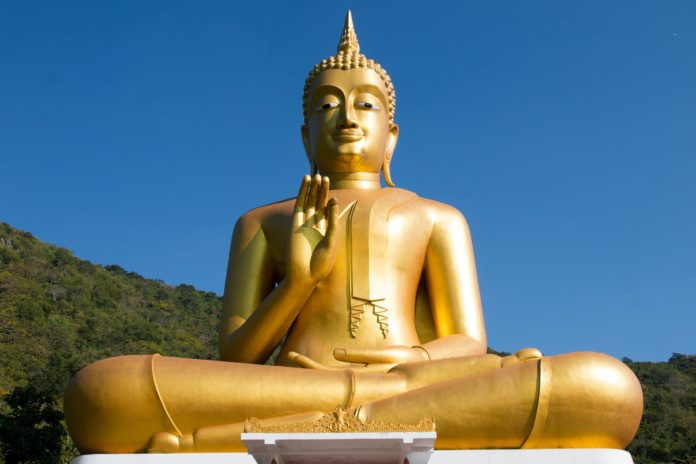 There are many cultures and religions around the world. Among all these religions, Buddhism is one of the most common and growing religions worldwide. Apart from being a religious aspects Buddha tattoo is also becoming quite popular among people.

In this article, we will explain Buddha tattoo meaning and various tattoo designs.

Gautam Budhha was a philosopher, teacher, and monk in the 6th and 4th centuries BCE. Buddhism was founded on his teachings, and ever since, he is considered an important religious figure.

Buddha was a born prince, but all the possessions and riches could not bring him happiness, and he realized that these could not protect a person from suffering.

He is said to have achieved enlightenment through meditation and found lasting inner peace and happiness. Then he started sharing his wisdom with others trying to explain the same state to other people.

To deeply understand the Buddha tattoo meaning, it is important to get familiar with the principles of Buddha. Here are the four noble truth of Buddhism:

The followers and their religions ‘ Buddhist values or virtues include loving, compassion, kindness, serenity, and empathetic joy. Their religion disapproves of hatred and anger, greed or attachment, and ignorance.

There is so much more to this beautiful religion than this. Like any other religion, it is impossible to summarize Buddhism’s practices and beliefs in a few sentences.

If you want to get a Buddha tattoo but are not familiar with the religion, then getting an insight into the meaning and beliefs will be a good idea. It is important to match your personal beliefs with the tattoo choice that you want to get inked.

You might be wondering what is Buddha tattoo meaning and what does it symbolize? Why would anyone want to get a Buddha tattooed on the body? We have the answers to all your questions.

Buddha tattoos symbolize the emergence of serenity and a sense of peace and also reflect the kind of person you are.

Buddha tattoo has various hidden meanings and symbolism that can be used according to various designs. Mostly Buddha tattoo ideas are simple yet beautiful, and when inked skillfully with intricate details, they look astonishing.

Let’s check out some of the popular Buddha tattoo ideas:

You will have plenty of options when it comes to getting a Buddha inked on your body. Some of the popular choices are:

The Lotus flower is a very important symbol of Buddhism. Therefore getting a lotus inked along with Gautam Buddha only makes sense. These two elements, when combined together, give a very great-looking and cohesive design.

Buddhist mythology says that Buddha was born from a white lotus flower and the eight petals represent the Eightfold path. The Lotus flower tattoo is also a symbol of enlightenment and fortune in general. The flower grows in dirty muddy water and yet rises beyond that beautifully and purely, blooming to its full capacity.

You can include a Buddha meditating tattoo on top of lotus flowers for eye-catching ideas.

3D Buddha tattoo designs usually involve hyper-realistic images of Gautam Buddha statues. You can get any design that is usually found in temples or traditional sculptures in the place of prayer.

The image of Buddha sitting cross-legged in a tattoo or elsewhere is quite common to see. This is traditionally meditating statues of Buddha. Not many people know this but every posture, gesture of Buddha in mediation form have their own meaning.

For example, a seated Buddha raising his right hand symbolizes protection, while a Buddha meditating with both hands in a lap represents serenity and calmness.

The face of Buddha

One more popular design among Buddha tattoo ideas is Buddha’s face with half-closed or full closed eyes in meditation, rendering a peaceful expression. You can combine the face of Buddha with many other elements like abstract floral designs and lotus flowers.

One biggest misconception in western cultures is that Laughing Buddha is also one of the representations of Gautam. But in reality, the Laughing Buddha tattoo is a representation of Ch’i-Tzu from the Chinese Buddhist stories. He was an amusing Ch’an monk and eccentric and is not the same as the Gautam Buddha.

Laughing Buddha is believed to bring prosperity and happiness and is a protector of children. Laughing Buddha tattoo is done in black outlines and solid cartoon-like appearances.

Buddha symbol has a spiritual and religious implication to every person who gets this inked. When you consider a tattoo design, it is important to be very careful in choosing design ideas.

Buddha tattoo ideas usually require a medium to large body area; however, you can get small and minimalist Buddha tattoo designs for small areas. Some of the ideal placement areas are the stomach, torso, shoulders and even a Buddha hand tattoo looks really great. Buddhist half sleeves tattoos are very popular among both men and women.

However, keep in mind that getting a Buddha tattoo anywhere beyond your waist is considered offensive.

Buddhist tattoo ideas are a great way of expressing spiritual beliefs and their importance to your life. When a Buddha tattoo is done appropriately with careful consideration, it can serve as a lasting testament to your personal principles and become a source of spiritual strength and inspiration. If you find this article helpful, don’t forget to leave a comment.