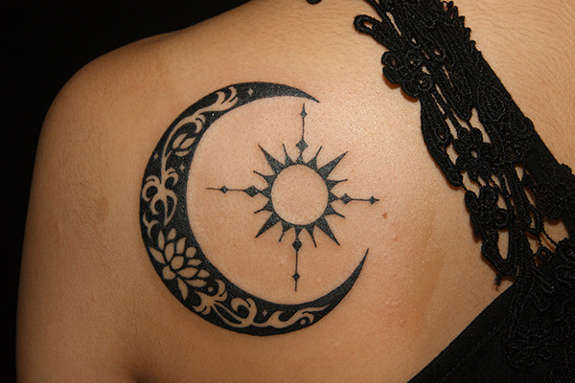 Nature and tattoos have an undefinable love story. A tattoo depicts the meaning, feelings, and expression of nature. Yes, that is what nature tattoos define. You may think of some of the famous or popular tattoos like living creatures or the floral motifs.

But nature has much more than these two. Skies, trees, and mountains are just unignorable when inked. Their eye-catching capability is way much higher than some of the other tattoos. They have their spiritual stories and beliefs.

Some of the natural tattoos like the black crescent moon, earth, and sun tattoos have various meanings. So, in this article, I am gonna tell you a lot of things, meanings, and facts about nature tattoos that you have never heard and heard about.

Tree tattoos are extremely captivating and appealing. They depict strength, stability, and longevity, which is probably the nature of the tree.

Trees are not only strong and stable, but their longevity attracts the mind of a person. In some parts of the earth, trees are served as gods/goddesses.

Some of the famous mythological trees are as follows:

Yggdrasil – An ash tree where gods used to gather together in Norse mythology.

Banyan tree – One of the most prominent trees in Hindu and Buddhist mythology.

Judaeo-Christian tree – This tree is also referred to as the tree of knowledge of good and evil”.

Oaktree – This tree is connected to the god of thunder.

We can say that people serving them as gods are indulged in the myths created in the past by their ancestors. But to be honest, there is nothing more pure and profound than nature to be praised like a god.

The positive sights of gods and goddesses and some of the beliefs say that some trees are home to spirits and magical creatures.

When it comes to their tattoo form, tree tattoos are just phenomenal in looks. Their branches reaching out of the stem makes them more fascinating. A leafless tree expresses the branches more effectively. Not only the branches but also the roots of the tree tattoo are stunning.

It depends upon the creative mind of the tattoo artist, and the one who wants to get inked that how the root, stems, branches, and the leaves (sometimes) can be drawn into a more eye fetching manner.

The power of the ocean and its waves can be said as the most unpredictable thing in the world. These waves express the exact meaning they carry with themselves that they can be as smooth as to be a playground for a surfer and can be as much destroyable as a tsunami.

The tradition of getting the wave tattoo is common in the Maoris of New Zealand. The reason behind this is the fact that their livelihood depends upon sea harvesting. The fruits inside the sea-run the livelihood of the people living in Maoris.

The basic form of this tattoo is extremely appealing. It looks quite classic. Simultaneously, its minimalist tattoo on the wrist, ankle, or neck is also a good option if you want to get one. This tattoo also carries a variety of meanings in itself.

The endless movement of the waves inside the sea depicts the infinity and “never to stop” ocean feeling. The rolling nature of the waves expresses the flux of consciousness and the ups and downs of life.

If you are a watersport enthusiastic or connected to the water, ocean, or beaches, this tattoo is a perfect match.

These tattoos look good in either blue or black ink. Japanese culture people prefer these tattoos too. People apart from such cultures of oceans and seas will find Hokusai “Great Wave” Print a pattern of semi-circles.

Therefore simple and clean minimalist tattoos are perfect for such an art. If you are an animal and sea lover both, you can get a dolphin or whale tattoo.

The tattoo is quite expressible in terms of its meaning to the people. A person with such a tattoo is the kind of person who loves to be on the top in his/her life. These tattoos also express the massiveness of timelessness, unbeatable strength, and permanence.

Just like tall and branching trees, mountains are also associated with gods and goddesses. Their religious beliefs are to an unexpected level. Whether we talk about the Mount Olympus

( the home of ancient greek gods), or about Mount Fuji ( one of the most famous Japanese mountains); all of them have great religious beliefs.

In modern culture, mountains have the same and equal powerful impact but are just different. People with good physical fitness usually get these kinds of tattoos. As the power of mountains is also undefinable, people connect them with strength and power.

Mountain tattoos are good-looking and are stylish. Their pattern designs and reaches whether the tattoo will look impressive or not. Impressive shading on the top and the root expresses the tattoo more effectively.

More detailed mountain tattoos can be inked at the thighs, chest, or the back. People can go with a broader imagination and creative ideas. You can use the sky or star shaded portion for the mountains. A sunset or sun-rise from the middle or the top of the mountain will also look fascinating and impactful.

If you are more up to eastern spirituality, you can get Mount Fuji inked with some Japanese characters.

Celestial Bodies and The Crescent Moon

The word crescent means “to grow.” The crescent form appeared in the early writing systems. Namely Egypt and Mesopotamia. It is also a symbol for silver in alchemy.

Another name for the crescent moon is the sickle moon, and the reason behind it is the same. It looks like the tool used for farming by farmers to harvest the crops. The Crescent moon with the star was used in the middle ages by Europeans. It was because of their gaining familiarity with the Byzantine Empire.

It was also the emblem of the Ottoman Empire. All the crescent moon’s meanings join to be at some particular words that are growth and regeneration. The “c” in the crescent depicts the curve of the moon. Well, scientifically, that is unethical.

It also works great as a minimalist tattoo. If you are thinking of getting a detailed one, then it would require more patterns and designs. If you are a night owl or a person who loves night more than days, then this tattoo is made for you.

The meaning of a full moon is tons of feelings. A crescent moon with a star depicts the power. A sun and moon tattoo symbolizes the universal love between both of them.

The warmness, happiness, and optimism are the things that the Sun signifies. The brightness is what it gives. Without the Sun, there is no life. Sun goes down a day and then rises again the next day. This nature of the Sun displays the factor of a fresh start.

Sun has infinite energy, and that is also a thing which it signifies, which is energy. There are various religious beliefs for the Sun. Whether we talk about Hindu mythology or the Japanese one, Sun is one of the most important and essential elements in the universe.

Whereas the meaning of Sun is not only limited to the light and sweetness. A black sun represents supernatural power. Nazi’s used this in the world war-2 also. Most of the sun tattoos are designed with a circle radiating lines on its surroundings. The waves radiating can be stylized in different ways by the tattoo artist.

People have various choices while getting a sun tattoo, but two of them are common. A stylized one or with a face. The choice is yours.

.These tattoos are also referred to as protection symbol tattoos. This protection tattoo will always provide you the energy to fight against the darkness.

Nature tattoos are extremely great to be inked. If you want to get a tattoo symbolizing strength and longevity, you can get a tree tattoo done yourself. If you want a tattoo with immense power and endurance, then a mountain tattoo is the best one for you. It is also known as strength symbol tattoo.

If you are looking for unpredictable powers and calmness simultaneously, then a wave tattoo is the best option. A crescent moon defines growth and regeneration. You can also get the tree of life and moon tattoo. The sun tattoo has an immense and infinite amount of energy. If this is the feature you are looking for, then a sun tattoo is made for you.

There are some tattoos which are well known as nature tattoos. Some of them are palm tree and crescent moon tattoo, swallow bird tattoo, tree of life with moon tattoo, etc.

I hope you like this article; for more such articles, stay connected. Don’t forget to write a review of this article.