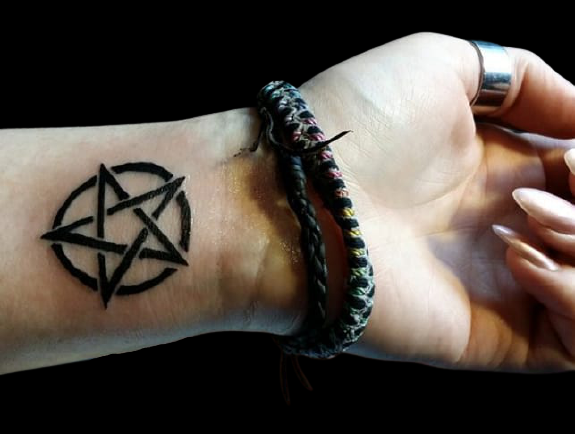 If you are looking for something mystical for your nest tattoo design, you should opt for pagan and Wiccan tattoos. The Wiccan tradition is full of interesting symbols with deep meanings. From dragons to pentagrams to symbols of goddesses, there is a wide range of beautiful designs to choose from.

Here is an article with a collection of amazing pagan and Wiccan tattoos to inspire your next tattoo design.

Getting a Wiccan tattoo symbol or pagan tattoo is the best way to honor your belief system. The design of your tattoo can help in defining your mindset. Moreover, it can also represent the uniqueness of your spirituality and personality. Below mentioned are some best pagan and Wiccan tattoos.

Triquetra refers to a triangle, and it depicts three arcs that are interlaced. It is one of the most popular pagan tattoos and is also one of the oldest symbols when it comes to Celtic history.

This tattoo has various roots; however, it is generally associated with Celtic symbols.

The tattoo design of triquetra includes an amazing entanglement of three petals, and a petal is a symbol of Goddess.

The symbolism associated with triquetras has widely increased. Now, it represents a combination of any three elements like the past, present, and future. The Triquetra design is an ideal choice for girls.

The triquetra symbol has different symbols and meanings in different cultures and religions.

In Ireland, this symbol is believed to represent honor and promise to love. Moreover, it is also considered a protection symbol tattoo. This symbol is not only limited to pagan or Wiccan tattoos; it is also included in necklace pendants and rings.

Pentagram is one of the most popular and common Wiccan tattoos. It represents the Wiccan belief system. A pentagram star includes a five-pointed star, and it represents air, fire, water, earth, and the spirit.

In Wiccan culture, people depict pentagram pointing upwards and not downwards. This is due to the reason that a pentagram pointing downwards is associated with Satanism. Therefore, if you plan to get these Wiccan tattoo symbols, make sure to situate them properly. The pentagram symbol in early Christianity is believed to represent the five wounds of Jesus.

Powerful dragon tattoos are one of the most popular choices. They are considered the most powerful mythological creatures found in myths and legends of different cultures. In various cultures, it is believed that dragons hold the earth’s wisdom and are also considered one of the luckiest of all creatures.

Now, you must be thinking about how dragons are associated with Wiccan tattoo ideas. One of the less popular practices of Wicca is Draconic Wicca. It combines Dragon and Wiccan magic. It is believed that Wiccans can call upon dragons to help them in different situations.

Dragon tattoos are considered one of the most popular tattoo choices for neck tattoos for men due to their amazing design and deep meanings.

When it comes to pagan tattoos, you have a lot of choices. Pagan faith celebrates various gods and goddesses, and you can include them in your tattoo designs. Similarly, Wiccan also seeks a specific deity or pantheon that might be of Roman, Celtic, Hindu, Chinese, or Greek religion. Gods and Goddesses tattoos are a popular choice.

If you opt for a God tattoo when getting Wiccan or pagan tattoos, then Pan is a popular choice. He is typically horned and embodies all aspects of sexuality and masculinity. Many gods and goddesses make an excellent choice. For instance, Lenus is a good choice. He is a Celtic healing God. If you want a Goddess tattoo, then you can opt for Epona. She is a Celtic horse goddess.

In order to get the most meaningful gods and goddess tattoo, make sure to do proper research. After this, opt for the tattoo that suits your personal situations, values, and needs.

It is a Wiccan symbol that includes three moons: waxing moon, full, and waning moon. These three phases of the moon represent the triple goddess, including the maiden, the mother, and the crone. These are the three phases of the female cycle. The maiden represents the new life and youth. The mother symbolizes fertility and power. Finally, the crone symbolizes rebirth and maturity. It is the best Wiccan tattoo idea to represent the divine feminine.

Norse is one of the most popular pagan tattoos. The Norse rune symbols can be an ideal choice for you if Nose paganism is your cup of tea. Some popular symbols for the Norse rune include the valknut tattoo, ouroboros symbol, and the hammer tattoo.

Each and every human is fascinated by the sun, the moon, and the stars. They make appealing Wiccan tattoos. If you want to encourage meditation or focus your energy, then a celestial tattoo is a perfect choice for you.

Celestial tattoos are the best nature tattoos, and you can place them anywhere on your body. Some popular places to get a celestial tattoo include angle, leg, or inner arm. Mon goddesses and gods are related to witchcraft. Due to this reason, celestial tattoos make amazing Wiccan tattoo ideas.

If you are an animal or pagan lover, then you can opt for your favorite animal as your pagan tattoo. If you belong to Native American spirituality, then you have a wide range of options. Some popular pagan tattoos include buffalo, tomahawk, or feathers.

If you are fascinated by Celtic Paganism, then you can opt for Celtic tattoos. Make sure to opt for a tattoo that deeply resonates with your soul as it is going to stay with you for a lifetime.

Pagan and Wiccan tattoos are attaining remarkable popularity. If you want to add some ancient magic and spirituality to your body, then you can choose from Wiccan tattoo ideas and pagan symbols. Make sure to do proper research before getting a Wiccan tattoo and opt for the one that resonates adequately with your beliefs.