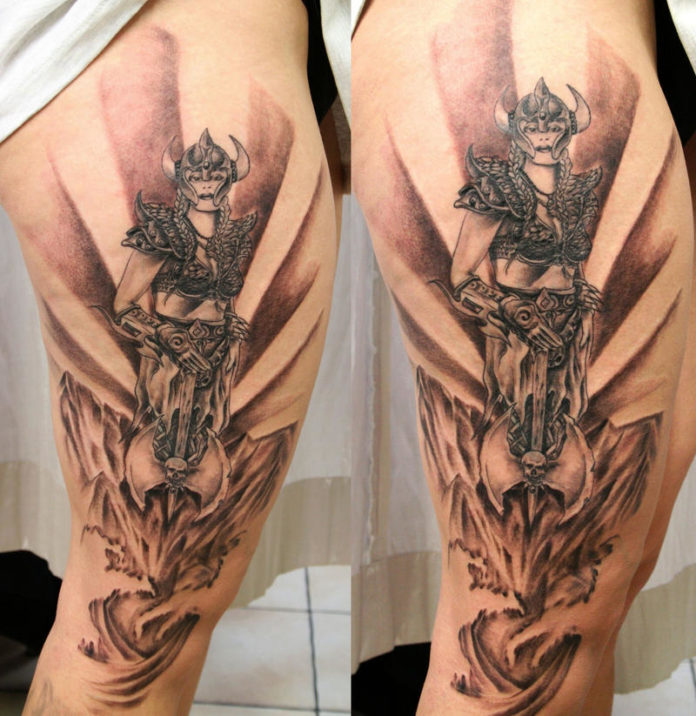 Do you want to get inked with something unique and attractive? Or do you want something fierce and meaningful? Well, whatever it is that you want from the two getting a Viking tattoo is what you will love.

In the article, we will tell you all about the Viking tattoo, including symbols, Norse mythology connection, Viking meaning, and more.

Before we move on to the other things, let’s first know who the Vikings actually are and the history behind these Norse heroes.

The Vikings were legendary warriors who existed in the world centuries ago. They existed roughly from the period of the 8th to 11th century. The Vikings were a group of fierce warriors who came to the other countries from Scandinavian countries like Sweden, Denmark, and Norway. Their purpose for coming was to raid and then settle down in the North Atlantic, Europe, and Asia. These legendary warriors were famous for their navigational and sailing skills among the other people.

The name Vikings come from ancient Norse mythology, which means “Pirate Raid.” In ancient times Vikings used to sail in the seas using longboats and go for raids on the coasts of Britain and northwestern France. They did these raids for centuries.

Did Vikings Have Tattoos?

It is not sure that Vikings had tattoos or not, but some sources tell us that they wore the tattoos. One of the major sources that tell us about the Viking tattoo is the literature by Ahmad Ibn Faadlan, an Arabic traveler of the 10th century.

Ahmad tells us that each Vikings warrior had a knife, sword, and axe with them at all times. The swords which the Vikings used were grooved and broad, which looked kind of Frankish sort. Every man in the Vikings was tattooed from neck to fingernails in dark green images of trees, mythological figures like Thor, etc.

At present, people who have a heritage of Viking roots get the Viking symbol tattoo to show their pride in their heritage. While other people get inked with the Viking symbol tattoo ideas as they are fascinated with the attractiveness and the deep distant culture attached to these tattoos. People also get fascinated with the mythological connection of these tattoos. What’s even amazing is that the Vikings’ beliefs and culture stills remain relevant in the modern world.

These are some of the popular Viking tattoo design ideas which you can try to have something attractive and unique for yourself.

Aegishjalmur: The Helm Of Awe

The Aegishjalmur is a Norse word that is pronounced as “eye-gish-hiowlm-er.” This word from the Norse means The Helm of Terror. The helm of terror is the most powerful symbol of Norse mythology, and it’s meant to be the most powerful rune of magic.

This symbol is a great option if you want to have protection tattoos as it represents protection in Norse mythology. The Aegishjalmur is made by rotating it around the runes of protection, and thus it is also known by the name of protection circle. This is why many Viking warriors in ancient times used to get this tattoo inked or carved between their eyes. They believed that it would provide them with protection or make them invisible.

It was also a way for the Vikings to scare the enemies as the tattoos made them look ferocious.

The valknut is one of the mysterious Norse symbol tattoos which you can get. It is a symbol in Norse mythology, which has three triangles that interlock with each other.

The valknut word comes from the Norse culture – Valor in it means “slain warriors,” and the knut word in it means “knot.” According to various archeological records, which were found on the numerous Viking runes stones and the burial of Viking ships. These symbols are associated with the Odin and death. It is believed that the symbol refers to battle death and is a symbol of Odin according to Norse mythology.

The valknut is also famous for being the Hrungnnir’s heart which is the knot of warriors slain, and Vala’s heart.

The Triple Horns Of Odin: The Horn Triskelion

The Odin’s triple horns are a Viking symbol tattoo idea that consists of 3 drinking horns interlocking with each other. This tattoo is the symbol of Odin, who is a nordic god.

This Viking tattoo symbol is also referred to in the Norse culture as a symbol of wisdom. So getting this tattoo can not only be a fascinating addition to the body but also meaningful. This is also a great choice if you want something unique for yourself.

Troll Cross: The Symbol Of Protection

Do you want a protection tattoo for yourself? If yes, then getting the Viking symbol tattoo of troll cross is what you will love.

This is a tattoo that includes a bent iron piece which is worn by the Scandinavian people in the form of an amulet. The Scandinavian people believe that the troll cross amulet protects them from the trolls and black magic. However, there is no conclusive evidence that Vikings used the troll cross. Although getting it as a tattoo can give you a fascinating piece of art that you can flaunt among your friends.

The Tree of Life: Yggdrasil

Yggdrasil in Norse mythology is a tree of life. In the Norse culture, it is believed that the Yggdrasil is a very giant tree that connects the nine realms or worlds with each other. Norse people also believe that its roots hold the nine worlds together and don’t let them drift apart.

The branches of the Yggdrasil tree stretch to all over nine worlds and also extend to above and up to heaven. Other than this, it is also a belief that the Yggdrasil acts as a spine of all existence as it is the one that holds together all the worlds.

Vegvisir: The Compass Of Vikings

Vegvisir symbol tattoo is one of the most popular Viking tattoo designs among people who have any connection with the sea. The Vegvisir is believed to be a compass that helps the sailors and people. It helps them in finding their way in the sea during bad weather and storms, according to Norse mythology.

The term Vegvisir means way-finder in the Icelandic language. Other than this, it is also famous as the compass of Vikings, which is made using the eight rune staves. This Viking symbol tattoo, according to the believers, is a symbol of guidance and protection. It is a way of reminding people not to lose their way in life. Thus it is a great Viking tattoo idea if you want a reminder to focus on your life and goals.

According to Norse mythology, Mjolnir is the hammer of thor. In mythology, Thor is the god of storms, lightning, and thunder.

Thor is also mankind’s protector and war god according to mythological beliefs. So, the tattoo of Mjolnir is also common among people in the form of protection tattoos. People believe that getting the Mjolnir as a tattoo provides them with strength, power, and protection.

The gungnir is one of the most famous weapons in Norse mythology and a popular Viking tattoo symbol.

It is the might and powerful spear of the Odin, which the mythology refers to as the most powerful weapons of all nine worlds. This spear of the Odin, according to the belief, is a weapon of the heavens. The term gunner of Norse language means the “Swaying one.”

The Muninn and Huginn were Odin’s two ravens. According to the belief, they used to fly all over the world in nine realms and bring information to the Odin.

Muninn in the mythology is the memory, while Hugninn is the thought. People have a belief that the two ravens are the projections of the consciousness of the Odin. The good thing about getting the Raven tattoo is that it is fascinating, and you can also combine it with other designs. Some of the popular combination designs to try with it include dreamcatcher tattoo, skull tattoo, and more.

Matrix Of Fate: The Wyrd Web

The Skuld’s net, or as known commonly as the web of the wyrd, is the matrix of fate according to Norse mythology.

This net is one of the popular Vikings tattoo ideas and is believed to have been woven by the Norns. The Norns were the shapers of destiny according to mythology.

These are some of the most popular Viking tattoo designs which you can try to have something unique and attractive.

The Viking tattoo designs are one of the most popular tattoo ideas, which you can try if you want an appealing and meaningful piece of body art.

In Norse mythology, you will find a number of amazing-looking pieces of design like animals, weapons, and symbols. So you get to choose from numerous options for your tattoo.

100+ BEST SNAKE FLOWER TATTOO IDEAS THAT WILL AMAZE YOUR MIND