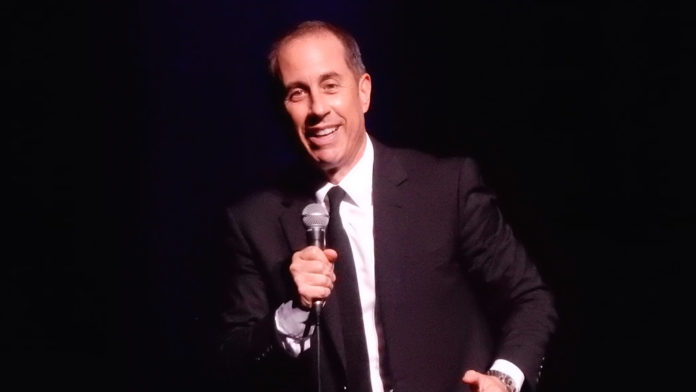 Seinfeld is the greatest sitcom of all time, and the numbers prove it. Based on the report, Jerry Seinfeld has a net worth of $950 million.

Here is a breakdown of how much is Jerry Seinfeld’s net worth and how much he makes from the show “Seinfeld.” Before we get to the big numbers, let us learn a little something about him.

Jerry Seinfeld is an American T.V. star and comedian with a $950 million net worth. The majority of his fortune is a result of his famous sitcom “Seinfeld,” which became the most profitable show in the history of television. Seinfeld owns 7.5% of the backend equity points from the show. Now not only does he make a fortune from his base salary, but he also earns exponentially year after year from global syndication sales.

To date, Seinfeld has generated billions of dollars as syndication revenue along with a $500 million contract with Netflix to acquire the rights of the show in September 2019 for five years.

On average, Jerry Seinfeld earns $20-$50 million in a year, depending on if he is touring or not. From a national tour, he makes $20 million. In 2020 Netflix paid Jerry $20 million to acquire exclusive rights to “23 Hours To Kill”, his special. Between June 2019 to June 2020, Seinfeld earned 450 million because of Netflix deals and touring.

Jerry Seinfeld was born in Brooklyn, New York, on April 29, 1945. He spent his growing years in Massapequa, New York, and after completing his second year, he earned a degree in theatre and communication from the University of New York at Oswego. He began inclined towards stand-up comedy when he was in Queens College and started appearing at open-mic nights periodically.

After Jerry passed out of college, he spent 15 years grinding to make a career as a stand-up comedian before he made a hit on the television. By May 1981, Jerry successfully toured for comics and made a successful appearance on the Tonight Show, Starring Johnny Carson. This further led to various appearances on the show again and also on Late Night with David Letterman.

In 1989, Jerry paired with Larry David, a one-time writer of S.N.L., to create an N.B.C. television pilot titled “The Seinfeld Chronicles.” Later the show was renamed “Seinfeld” and was aired in 180 episodes in 9 seasons. Today, Seinfeld is considered the Best Comedy Show of all time. The show became most successful in the syndication of tv history, generating more than $4 billion in revenue to date.

For seasons 7 and 8, there were a total of 46 episodes of Seinfeld by then; he was making $500,000 per episode, which totals $23 million. For season 9, Seinfeld was earning $1 million per episode totaling $24 million.

Jerry Seinfeld was the first-ever television actor to make $1 million per episode. Soon Tim broke the record by earning $1.25 million the following year for working on Home Improvement. After adding all of this together, Jerry Seinfeld made $60 million by salary alone, which makes a major contribution to his net worth.

N.B.C. desperately wanted Jerry to come back for the 10th season, and the channel offered him to pay $5 million for each episode to make one more season. That season would have generated $100 million for this season. Had Jerry accepted that offer, he would be earning $5 million per episode, the highest ever fee paid to a television actor who is twice Charlie Sheen’s $1.8 million for the Two and a Half Men in 2010.

Outside Seinfeld, Larry and David both owned a 7.5% share of the backend equity points. When the show was at peak success, they negotiated a new deal with the N.B.C. channel and doubled their ownership stake to 15% each.

When the show was sold first time in 1998 into syndication, it was making $1.7 billion as revenue. This left Jerry and Larry with $225 million windfalls. Jerry Seinfeld also makes $800 via merchandise, DVD, and syndication deals. Unfortunately, Larry’s net worth was cut in half after getting a divorce from his wife Laurie Lennard in 2007.

In 1998 when Jerry Seinfeld was 38 he met Jessica Sklar in a sports club a few months before marrying Eric Nederlander, a theatre producer. Three weeks after their honeymoon, Sklar broke up with her husband and moved in with Jerry. After four months of the wedding, the husband filed for divorce. After a year, Jerry and Jessica got married and have been together ever since. The couple has three children together.

Did you know Jerry has one of the biggest Porsche collections in the world? He has a total of 150 vehicles, of which 45 are Porche. For many years, Jerry lived in Los Angeles to film Seinfeld, and there he used to keep his entire collection  at the Santa Monica airport.

In 2002 Jerry spent $1.4 million to buy a property in the Upper West Side of Manhattan. He spent another $500 thousand to construct a garage to house his dozen cars.

Jerry Seinfeld’s jaw-dropping net worth has got him some great real estate properties IN THE U.S.A. Let’s take a look.

In the year 2000, Jessica and Jerry paid $32 million in three different transactions to buy a 12-acre oceanfront property in East Hampton, New York. They spent millions of dollars on the house’s renovation, including a new house on the property, which has a private baseball area at the backside. This property has a 22-car garage.

In 2005, the Seinfelds bought a townhouse for $4 million in New York City. Their main house in N.Y.C. is the 19th flower of a building that overlooks Central Park. He spent many years renovating the Upper West Side co-ops and implemented a new rule against the extended renovations. People call it the “Seinfeld Law.”

Jerry Seinfeld spent $4.5 million as rent to the Santa Monica airport warehouse to keep his cars while he was staying on the West Coast. In 2011 they bought a modest lake house in Vermont.

Read More-Net Worth Of Donnie Wahlberg

Here are some of the funniest Jerry Seinfeld quotes for you.