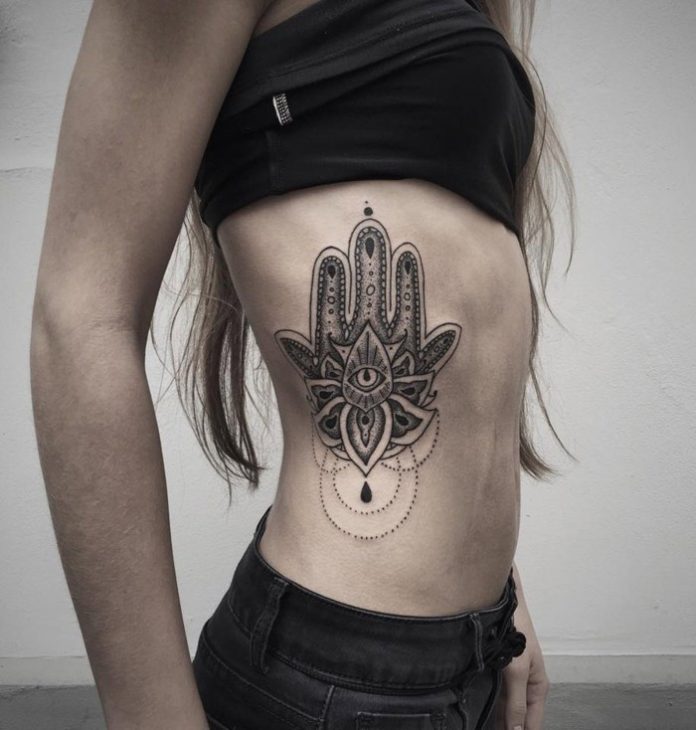 Across the world, for many centuries, humans have got inked with protection tattoos. Whether its body painting, jewelry design, or tattoos, almost every culture has visual imagery of protection symbols.

These protection symbols are a means to find strength and comfort in times of distress. These days symbols of protection are featured in tattoos as well as jewelry.

If you are planning to get inked with a protection symbol tattoo design, it would be best to take out some time to research what each symbol represents.

Choosing a protection tattoo design will ensure that it is both meaningful and ethically pleasing to your life.

List of Seven Tattoos as a Symbol of Protection

Algiz is a rune corresponding with the letter Z. the correct pronunciation of Algiz is ‘awl-GH-eeze.’ The Vikings believed that Algiz is one of the magical protection symbols.

This protection symbol tattoo looks like a tree, formed on a single line pointing upwards. It has two forks like branches splitting into both the sides near the top.

The Viking protection symbol tattoo meaning is the horns of elk protecting animals. This protection tattoo also looks like the upraised arms of a person depicting a human trying to reach the divine beings in heaven.

Algiz is considered as a powerful rune in the Norse Culture. One another Norse protection symbol design is the Helm of Awe. The Helm of Awe Tattoo is an eightfold repetition of Algiz Rune.

The Helm of awe tattoo looks attractive and is one of the best protection symbol tattoos.

Africa is made up of many countries. Ancient Egyptians in North Africa considered the falcon god Horus as the Sky God with the sun as one eye and moon as the other.

Horus was the Goddess Isis. Ancient Egyptians considered the Eye of Horus as a spiritual protection tattoo. This symbol of protection appears on pharaohs and ships entombed in the pyramids with Eye of Horus amulet in the necks. This is a positive protection symbol tattoo.

The areas of Ghana and Ivory Coast are rich in Adinkra Symbols. The Akan and Ashanto people use these symbols in pottery, architecture, and cloth. Now, these symbols have become a popular spiritual protection tattoo.

Nyame Dua, or the tree of god, is also one such symbol representing the presence and protection of the divine being. Nyame Dua is a sacred place in the local culture where rituals are conducted.

As a protection symbol tattoo design, Nyame Dua is a four-part heart-shaped symbol depicting an aerial cross-section of a palm tree.

The evil eye protection symbol comes from a region where the eye color pf people is brown or black. In these areas, people with light-colored eyes are rare to see and are said to have bestowed the curse within them.

This is the reason amulets in turkey and Greece originated with a blue eye. The blue eye painted on objects acts as a protective shield to the evil eye. It is believed that when a curse is pushed upon a person, all the damage is reflected by the evil eye.

Evil eye protection tattoos can be designed in many different styles. The cultures who believe in the evil eye curse do not have a fixed design, but the symbol comes in various sizes and shapes.

All the evil eye protection tattoos keep you safe from evil and have a scary, violent, and aggressive glare. Usually, evil eye tattoos can be seen in classic blue color or blank ink.

Evil eye protection tattoo design is provocative yet straightforward that seems to look right through you.

People usually get an evil eye tattoo on the forearm, back of the neck, and the bicep. This protection tattoo design looks great anywhere on the body; it just matches the graphic size with the tattoo’s appropriate area.

The Hamsa is a hand-shaped symbol usually seen in traditional henna design in the Middle East. Hamsa hand is a symbol of the “Hand of God.” it is one of the positive tattoos, which means protection, health, good fortune, and happiness.

The Hand of Hamsa has great importance across many cultures and religions. It is also known by the names: the Hand of Miriam and Hand of Fatima.

It can be designed in two ways. One of the patterns is based on the usual hand, and the other design has two thumbs. The hamsa hand protection symbol can be either facing up or down. If it faces down, it symbolizes abundance and luck. If the hand id faces up, it is considered a powerful protection symbol to keep you safe from all the negative energies.

Read More: The most painful paces to get inked on your body.

The Celtic Shield Knot protection symbol stands for Universal protection and represents infinity with no sign of beginning and end to the design.

This symbol of protection was used on the shield of the Celtic warriors. The people used these protection symbols in their regular life to keep away the evil spirits. The Celtic Symbol was derived from the Norse symbol, Odin’s Cross.

The arms of the solar cross ented out a little to touch the edge of the circle. This symbol represents the sun’s movement from the morning to night in all the four-season throughout the year.

One more popular Celtic protection symbol tattoo is the Triquetra. It has a three-cornered design and is also sometimes weaved in a circle. It represented an ancient symbol dating back to 500 BC and was believed to symbolize three gods aspects-maiden, crone, and mother.

With Christianity’s arrival, this symbol represents the Son and Holy Ghost, Holy Trinity of Father, to the early Irish Christians. This protective symbol also represents air, earth, and water.

This protective symbol tattoo is becoming very popular in the 21st century and is also used in decorative work and jewelry.

Dreamcatchers are one of the most popular tattoos, especially among girls. These are not thought of as a protection symbol but are known to catch dreams and keeps the person safe from all the nightmares.

Dreamcatcher tattoos can be designed in many different colors and styles. Most dreamcatchers are decorated with beads and feathers. Some designs also incorporate animals such as horses, wolves, and eagles that are linked to the Native Americans.

The circular-shaped area, catcher, acts as a canvas for the tattoo artists to work with. Some tattoos have a simple design with a web catching the dreams, while others fill the central area of the dream catcher with colors, maybe flowers, tree of life, or anything the wearer likes.

Wiccan is a witchcraft practice that is rich in symbols for protection and spells. One of the most popular Wiccan protection symbols is Pentacle.

The Pentacle is associated with white or good magic and is a protection symbol and keeps away the evil eyes.

In a pentacle tattoo, the star’s four corners represent the element of water, fire, air, and earth. The fifth point stands for self.

Wiccan people believe that pentacle protection tattoo is one of the most powerful symbols in witchcraft.

Cupid, shooting the bow through people’s hearts, is also an angel figure showing people to fall in love.

The Angel of protection is also linked to earth and heaven, showing religious and spiritual beliefs. All the big religions have their reference to angels; this is why the Angel of Protection symbolizes religious beliefs and is also one of the spiritual protection tattoos.

Outfits To Makeover Yourself In 2023