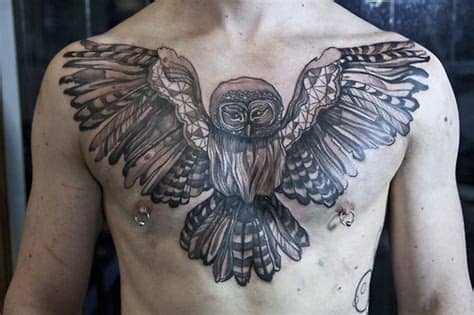 If you are looking for unique tattoo ideas, then the owl tattoo is a perfect choice for you. An amazing detailed owl tattoo can be a mesmerizing addition to your body art. Like other animals, owls also have an ancient history, which renders meaning and symbolism to this tattoo. Here is an article with all you need to know about owl tattoo meanings, design, and ideas.

The owl is linked with intelligence and wisdom. Moreover, it is associated with a sense of the afterlife and deep mystery. Due to these reasons and a top-notch visual appeal, owls make a famous subject for tattoos.

Due to a wide range of designs, there is something for everyone. Whether you are looking for a realistic portrayal of an owl or an abstract version, you can easily find an appealing tattoo design. This nocturnal bird looks amazing in both simple and small or larger and detailed pieces. Continue reading the article for owl tattoo meaning and its symbolism.

The owl is a night animal and an expert hunter. Ancient people connect owls to air and travel. It was believed the owl could help people travel in a spiritual sense and find self-worth. It is a path of wisdom and knowledge.

The owl symbolizes truth. This nocturnal bird can not be deceived, and therefore it is mostly related to the transition to a spiritual path and the path to personal transformation.

Many people find owls terrifying also. If someone sees an owl in dreams, it means an upcoming personal transformation where the truth will be revealed.

The owl symbolizes wisdom and intelligence. With beautiful large eyes and a steady stare, the owl is related to intelligence. Here are some popular owl tattoo meanings.

Owls are usually seen at night. This animal is a night hunter, and therefore, many people link it with the solitude of night and mystery. In addition to this, night owls are associated with death and the underworld. It is believed that owls convey messages to individuals who have died. In this regard, an owl is a mysterious animal with an air of terror.

The Owl and Death

Some people associate owls with death. According to our modern understanding, death is considered materialistic, but in older days, it was considered a transition from one state of soul to another one. In this regard, an owl is an essential spiritual; figure.

The ancient Egyptians respected the owl because it was considered a gatekeeper to the afterlife realms. They believed that when a person passes from one life to the next, the owl accompanies them throughout their spiritual journey, offering protection and guiding the way. Moreover, owls helped people to transit from a physical state to a spiritual state of being. Therefore in many owl tattoo meanings, this animal is associated with death and transition.

Athena was one of the most interesting spiritual figures in ancient Greek history. She was the patron diet of Athens. Athena considered owls as a sacred animal. It was associated with protection.

For people from ancient Athen, if an owl was caught flying over the army, it was considered a good omen. Moreover, it symbolized victory and protection.

The hunting aspects of the owl are also expert. They are stealthy and agile hunters and are almost unmatched.

The Crone Aspect of the Goddess

The owl was considered sacred and important by the ancient Celts also. They considered owls essential in their understanding of death and life. The owl represented the Crone aspect of the Goddess. Owl helped people on their journey after death.

The ancient people recognized the guiding aspect of the owl. The nocturnal hunting instincts and keen perception gave power to the owl to protect people after death. Moreover, it guided them on their journey to a new state of being.

The Owl and Harry Potter

If you are a Harry Potter fan, then an owl tattoo is a perfect choice for you. The Harry Potter series shows that there is a long tradition of providing special places to the owl in different human cultures.

In the Harry Potter series, Hedwig is the most famous owl. He not only comforted Harry but also connected him with the magical world of Hogwarts.

Hedwig is a messenger as well as a protector in the story. Moreover, in the movie also, Hedwig accompanied Harry in his journey and transition from one state to the other. Moreover, Hedwig guided Harry in his movement between the Muggle world and the Hogwarts world.

Reasons You Should Get an Owl Tattoo

The owl is an amazing creature with a deep history of meaning and pure symbolism across different cultures.

If you are looking for some unique tattoo designs with deep meaning, then you should get an owl tattoo. Given a long association with gnosis and wisdom, you can think of getting an owl tattoo if you have an interest in truth-seeking.

Now that you know owl tattoo meaning, here are some popular owl tattoo designs to help you find out the best one.

If you are looking for an appealing tattoo design for the chest, then the owl chest tattoo is the one for you. A large owl with fine details can cover the whole back. Use the shape of the tattoo to cover your back. For instance, get a flying owl tattoo with its wings outstretched.

When it comes to location, the chest is a little discreet, allowing you to cover up easily whenever you want. Chest tattoos look amazing but remember that chest is one of the most painful spots to get a tattoo.

If you are looking for tattoo placement ideas for an owl tattoo, then the neck is an amazing spot to consider. Owl tattoo is a perfect choice when it comes to neck tattoos for men. If you are brave enough to get inked at the neck, then go for it as it will make you stand out in the crowd. Neck tattoos provide you a bold look and a strong style statement. Owl tattoo design at the neck looks eye-catching, and it is an ideal spot to show off your amusing artwork.

When it comes to hand tattoos, your creativity is the best limit. It means that the beautiful and detailed owl tattoo at hand looks incredibly-eye catching. Owl tattoo meaning differs according to the design. The only thing to remember when getting inked on hand is that tattoo design at this place fades faster as compared to other tattoo spots. Moreover, this area has thin skin, and it is highly sensitive. So make sure to consider essential things before getting a tattoo.

Owl has a significant meaning in different cultures, and in this tattoo design, the owl is combined with another important symbol that is the dream catcher. This creation is used to render protection against bad dreams and is also related to protection. An and dream catcher tattoo is seen as a way to preserve the spirits of loved ones who are no more.

If you are someone who loves simple tattoos, then simple owl tattoos with no details are the one for you. The simple design looks classic and beautiful at the same time. If you are looking for something more classic, then a traditional owl tattoo is a perfect choice for you.

Owl tattoos represent wisdom, transition, and intelligence. They look amazing, and when it comes to designs, creativity is your limit. Now that you know owl tattoo meaning, what are you waiting for? Get a beautiful owl tattoo, and do share your experience with us by dropping a comment.