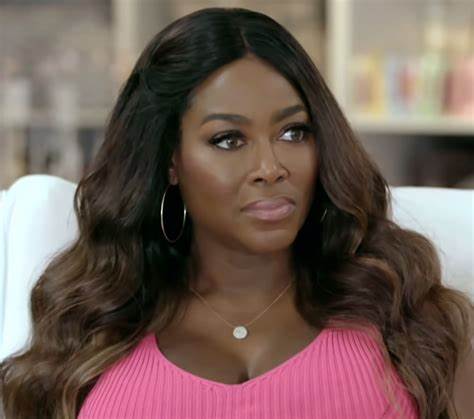 Kenya Moore is an American model and reality tv actress with a net worth of $800,000. She is popular for being a cast member of The Real Housewives of Atlanta. If you want to know about Kenya Moore net worth, her personal life and career success, then keep scrolling down.

Kenya Moore was born on January 24, 1971, in Detroit, Michigan. Her parents Ronald Grant and Patricia Moore, were merely teenagers when the couple gave birth in Kenya. When she was merely three years old, her mother abandoned her and Kenya was raised by her father’s grandmother and aunt. Kenya never spoke to her father or mother.

She started modelling at the age of 15 and was the cover girl for January 1992 Ebony Man magazine, a Chicago based publishing company. She also modelled for the Ebony Fashion Fair Cosmetic line. In 1989 after completing her graduation from Cass Technical High School, Kenya, for admission into Wayne State University to major in psychology and minor in communication.

In the 90’s Morre began competing in various beauty pageants. When she was 22, Moore won the Miss Michigan USA pageant in 1993. Later she competed for both Miss Universe and Miss USA pageant. Kenya was the second-ever African American woman to win Miss USA and was at the fifth position at Miss Universe. Sadly, her position was overshadowed by the booing of the audience when she was announced.

Kenya used her beauty pageant success to get into a television career and a guest-starring on various shops liKe The Steve Harvey Show, The Fresh Prince of Bel-Air, Living Single, The Parent ‘Hood, and Martin, Sparks. She also did several small roles in movies like Deliver Us from Eva, 1995’s Waiting to Exhale, I Know Who Killed Me, and Cloud 9. Kenya has also appeared in music videos like Nas, Jermaine Dupri, Tupa and Shai. This what contributed a little to Kenya Moore net worth.

Producer and other Ventures

Kenya published her book named Game, Get Some! In 2007 and in 2014, she launched her own haircare brand. Mooer also has a DVD workout series named “Kenya Moore Booty Camp”.

Read More- Net Worth Of Cynthia Bailey, The Real Housewife of Atlanta

Kenya Moore confirmed joining the cast of the real housewives of Atlanta in May 2012. She replaced Sheree Whitfield, a long time cast member on the show. Kenya is the centre of controversy and drama in the entire show. Her fellow cast members on the show never know what to expect next and have to deal with the odds of her actions.

Kenya Moore got married to a restaurant owner and businessman Marc Daly in June 2017. In April 2018, the couple announced their first pregnancy and gave birth to a beautiful daughter, Brooklyn Doris Daly, on November 4 2018.

Kenya Moore told that they named the daughter after the location where she met her husband for the first time. Dorsi is the middle name after Kenya’s late grandmother. Unfortunately, Kenya and Marc split in early 2020. She talked about their divorce on The Real Housewives episode in March 2020, claiming she found sexting messages on her husband’s phone with his ex.

Over the years, many rumours have been swirling around in the industry about the poor financial situation of Kenya Moore. This topic has also been joked about and discussed on RHOA.

In 2013 the main evidence about Kenya’s troubles was out in the open when she was evicted from her Roswell, Georgia mansion. Kenya had apparently failed to pay the rent of the house for several months, which is $4000 per month.

People get exhausted, trying to figure me out. And I just let them.

I love fashion. But I love it in a different way than most people. I’m not obsessed with it. I’m just obsessed with looking good and wearing clothes that make me feel good.

Kiss the blackest part of my behind.

I think the beauty industry is a stepping stone in terms of pageants that will give you a launching pad to be seen. For people to understand who you are and what you stand for… I think it teaches self-esteem and self-worth. And it also encourages you to have a more philanthropic viewpoint of the world.