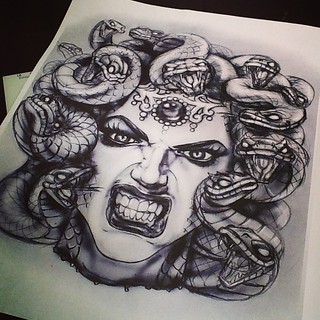 Does Greek mythology inspire you? Do you want Greek symbol tattoos? If yes, you might want to take a look at the ancient Greek symbols and their mythological meanings.

Greek mythology is filled with various heroic characters, gods and goddesses, and their great deeds. For centuries Greek symbols have served as an inspiration to men and women with their valor and strength.

In this article, we have included some of the best Greek tattoo ideas for both men and women.

Greek symbol tattoos are very complex and have an intricate design pattern. Every Greek mythological character holds great significance and deep symbolism. Learn everything about the greek symbols and their meanings.

Greek writing contains inscribed biblical verse in a classy attempt and Greek writing symbol tattoos can be very meaningful and significant for the wearer. Lettering tattoos are very popular among the Christian people who like to declare their beliefs to society.

Greek writing tattoo ideas are famous in England, America, and Australia. These tattoos are dedicated to Jesus and the verses given by him. This also represents your faith in God and divinity.

If you have an intense admiration for classical Greek literature, you can get this tattoo style irrespective of gender.

Dove is seen as a symbol of calm, peace, and serenity. The most popular Greek tattoo ideas feature a white flying dove holding a green leaf in beak and Greek words written below it, which have Biblical meaning and significance.

This Greek symbol is the most loved of all tattoos. It represents dry land that suffered a great loss for 121 days during the Noah days. Girls usually prefer this kind of tattoo more than boys, as it is small, elegant, and meaningful.

This dove tattoo also symbolizes ancient historic rule by Noah. The green leaf is a symbol of hope representing that it is good in the devil. Greek dove symbol tattoos can also be combined with Greek name tattoos to express love towards someone special.

If Greek mythology fascinates you, then take a look at the Achilles tattoos. Achilles was the hero of the Trojan War and the main character of Homer’s Iliad. He is a symbol of strength, courage, and patience.

The Greek warrior tattoos portray the picture of Achilles at war, looking beauteous and dynamic. You can see him holding a shield in one hand and the word in another.

Achilles Greek mythology symbol tattoos are a sign of stretch and protection. These ancient Greek tattoos are regarded as a tribute to the Greek soldiers who fought for good.

If you adore the heroics of Achilles, then go and get this tattoo inked on your arm.

If you are searching for some great Greek leg tattoo ideas, this one’s for you. Christ the Conqueror makes a unique, appealing, rich, and beautiful tattoo. It will grab the attention of the people wherever you go.

The cross symbol in the center of four Greek symbols looks enchanting and modern. Not only legs, but you can have this tattoo on any part of the body you like with a large area to work on.

Such Greek god symbol tattoos have very deep meanings. You can even get this in a small size on your wrist. People who are firm believers in Christianity prefer this tattoo the most.

Greek arm tattoos designed with complicated patterns give a stylish impression of ancient greek history. Getting such tattoos will surely make you look distinct and attractive.

You may see dark borders around the tattoo inspired by Greek tribal tattoos giving a message to people. Dark tattoos also look great as a wrist band, and even girls prefer this tattoo style for the waist. You can also get such Greek lettering tattoos to show your dedication to the bible.

One popular choice in Greek tattoo ideas is a monster symbolizing evil. These are often seen on wrestlers. The tattoo gives a glance at some of the most dangerous monsters ever captured by humans as slaves. People get these tattoos to reflect their dangerous side and are very popular among men.

People who want simple and fashionable Greek arm symbol tattoos will love this style. These Greek tattoo ideas contain the portrait of ancient symbols surrounded in a black circle. The tattoo looks attractive, neat, and pleasant.

These small Greek tribal arm tattoos are a symbol of honesty, truth, care, and love. The dark color looks very attractive and leaves a deep impact.

Different tribal Greek symbols have different meanings. People usually love symbols that reflect their true personality and nature. These can be inked on the wrist, neck, chest, and leg.

Angels have always been a part of Greek mythology. The word angel is derived from a Greek word called “aggelos,” meaning messenger. A Greek angel tattoo is portrayed in a classy manner and elegant posture with its beautiful gigantic wings and sword possession.

Greek Angel Tattoos are one of the best and are also referred to as a Guardian angel tattoo. Like a mother or father fighting against evil to save their children, the angel tattoos are worn as a protection symbol.

Medusa is a very popular monster of ancient Greek mythology possessing poisonous snakes on the head and a hideous face. This is a classic character monster character, and originally getting her tattoo can be a great idea.

People believe that getting such Greek symbol tattoos on the body saves you from evil deeds others want to do to you. These tattoos are also known to protect from black magic and evil energies. These tattoos also symbolize the historical way of how Medusa died.

Medusa’s eyes are usually drawn facing down, and it was believed that if anyone stared into them, they would turn to a stone. This is one of the best ancient Greek mythology tattoos. If you are a firm believer in supernatural powers and Greek Goddesses, then get this tattoo inked.

Realism tattoo refers to a tattoo style that is drawn in a lifelike pattern. The images in these tattoos look realistic, like the characters in portraits. Realism tattoo styles are often used to depict the Greek gods and goddesses.

These realistic tattoos reflect the physical attribute of the subjects as well as convey emotions and feelings. You can get them in grey, black or any color that you like. Combining black and grey with red gives divinity to the whole design.

Realism is generally done on medium to large size tattoos and look good on both men and women. Such Greek roman tattoos symbolize truth, divinity, pure love, and the victory of good over evil.

If you like fun, colorful tattoos with deep meanings, then try Illustrative Greek God tattoos. The illustration resembles the comic and book art. You can feature any subject in your illustrative Greek tattoos like Goddesses, Gods, and inanimate objects like weapons, apples, armor, and spear.

Illustration tattoos can range from medium to large sizes and are usually drawn in large area body parts. You can fault this tattoo art as they are very colorful and eye-catching. Both men and women can get this tattoo style.

As we know that Greeks give great importance to inanimate objects, the apple also is a key subject for Greek tattoos like weapons and armor. If Greek mythology inspires you, get this tattoo done with the hints of black and grey.

If you are interested in getting Greek god tattoos, then this is for you. Athena is a very popular Greek mythology goddess; hence makes the most loved choice for a tattoo.

Athena is known for her charming look and aura and is always dressed like a warrior. She is also known as Minerva, the goddess of wisdom. You will generally see her symbols, drawings, and statues with an owl. Athena is considered the epitome of culture, cleverness, spirits, and freedom in Greek mythology.

If you want a tattoo that can represent your brave heart who is not afraid of taking risks, then Centaurs Greek symbol tattoos will be the right choice for you.

Centaurs are half-horse and half-man creatures of Greek mythology. They have the chest, head, and arms of a human and the body of the horse. These are considered as the children of Ixion and Nephele (king of Lapiths and a cloud image of Hera).

They are known for their fierce and violent nature and depict untamed minds, animal instincts, and virility. Centaurs are often represented with a bow in their hands, signifying them as warriors.

People who are courageous and have a valor side to their personality often get these Greek mythology tattoos.

Read More:- Check out These Attractive Elbow Tattoos To Adorn Your Elbows

Greek symbol tattoos are extremely artistic and intricate with a deep meaning and ancient mythological backgrounds. Greek tattoos are not a mere art, but they have deep symbolism.

Every Greek God and Goddess tattoo is given a different appearance and symbolizes unique qualities. Gets the tattoo that resonates the most with you and your true nature. Get ready to Slay!