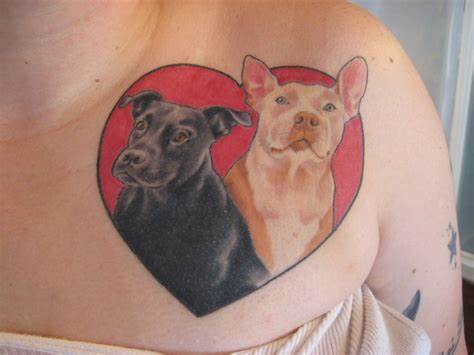 In This Article hide
1 Dogs in Popular Fiction
2 Dogs in Ancient Times
3 Should You Get a Dog Tattoo?
4 Popular Dog Tattoo Ideas
4.1 Foo Dog Tattoo
4.2 The Dog Paw Tattoo
5 What about Other Pets?
6 Final Words

“Dog is a man’s best friend,” we all have heard this saying. All of us have a soft corner in our hearts for our dogs, and what better way to express this than by getting a dog tattoo.

Dogs have been a favorite pet of humans for years. Did you know that dogs are the only animal on the planter that can interpret and react to human body language? No other animal, even the closest primitive relative, can do this without getting intense training.

Dogs have a highly adaptable nature and have learned to communicate with humans way more easily than other animals.

Let me tell you one more interesting fact: dogs have a special eye muscle that allows them to look sad to appeal to human emotions.

The importance and love for dogs and other animals go back to ancient times. Simple dog tattoo ideas can have much meaning, including:

You must have seen various fiction and cartoon movies depicting dogs as the best pal of humans. From Beethoven to Lassie, dogs have been there for humans whenever we need them and express their love through their actions.

For instance, Lassie is a symbol of a dog’s protective instinct. The famous border collie breed protects and nurtures other people by seeking help and giving warnings of danger ahead.

Dog tattoos can also symbolize teaching and communication. For example, in the movie A Dog’s Life, the dog teaches the true meaning of what life is. Dogs are wise, as they prefer to live in the moment. They have so much to teach us the purpose of life if only we knew what to accept and where to look.

Of course, dogs have not been friendly creatures since ancient times. You might know about the mythical dog Cerberus from ancient greek mythology. If not, let me tell you. Cerberus was a three-headed and snake tailed guardian of the Underworld.

In Greek mythology, dogs were a symbol of something scary and monstrous. However, even the Cerberus reflected the protective instincts of a dog and was there to protect the dead souls.

Another popular dog from ancient times is in the starry sky. Orion The Hunter always has his faithful dog by his side. The dog here represents courage, power, and bravery.

All these ancient myths and stories represent that we have a special relationship with the canines for more than a thousand years.

How could we forget about Sirius, the red dog star seen in the night sky? Cynopolis people worship the Sirius Dog Star and can be seen in various ancient images.

Yes, people have other pets as well; one of them is a cat. But how many pets have an entire Egyptian city dedicated to them? The ancient city of Cynopolis in Egypt is dedicated to dogs. People who used to live there were bound to take care of all the dogs with great respect and diligence as per law.

Even in far east Japan, dogs hold great importance. You will see big guardian dogs outside temples. In Japan, dogs in many Asian countries is a symbol of good fortune and good luck.

Should You Get a Dog Tattoo?

When we look back at ancient times and the wonderful association between dogs and humans, it is no surprise that dog tattoo ideas are one of the most popular kinds of pet tattoos.

No doubt, many dog owners love a simple dog tattoo as a reminder of their four-legged furry friends. Many people also get small memorial dog tattoos inked in the memory of their pet.

Dog tattoo ideas are not just for the memories, and these also symbolize a close relationship between humans and dogs. There are a lot of people out there who love a dog tattoo for the spiritual sense.

Dogs are known to teach us a lot about life and are considered guides of the journey called life. A Dog tattoo symbolizes dedication towards living in the present and giving unconditional love.

There are a lot of different dog tattoo designs; however, some of them are more popular and loved the most by people.

A Chinese lion dog, commonly known as The Foo Dog, serves as a fierce guardian. Foo dogs have been a part of Chinese and Buddhist Art for many years.

Lion-dogs are fierce and protective and serve as a guardian. When it comes to small foo dog tattoos, they comprise two foo tattoos similar to Yin and Yang’s concept. Even after being a fierce guardian, the foo dog tattoo is also a symbol of calmness in Buddhism, wisdom, strength, and calmness.

If you relate to these symbols and are willing to get a similar tattoo, then dedicate a large space of your body to foo dog tattoos. The two foo dogs will represent Yin and Yang and are highly detailed with lots of colorful ink.

Read More:- These Are The Must Know Things About Watercolor Tattoos

A simple dog paw tattoo is perfect for first-timers or people who want small dog tattoos. Dog paws can be recognized immediately and can be a representation of your own dog. It also represents the qualities of a dog like communication, playfulness, loyalty, etc.

People also prefer to get their own dog’s paw inked on their body as serve as a forever reminder of their furry little friend. A simple dog paw print tattoo will serve as a lifelong reminder of your special pet.

What about Other Pets?

There are many types of pet tattoos other than dogs. Another animal that makes popular pet tattoos are cats. Cats make a popular pet tattoo design for various similar reasons. Like dogs, cats also had a great significance in ancient times like Egypt. People get a cat symbol inked to display their ultimate kinship towards them.

You can get various types of pet tattoos on your body to remember your beloved pet. A goldfish, your favorite hamster, or maybe a bird. Tattoos always serve as reminders of your relationship and your feelings towards your beloved pet, and every animal holds a special meaning.

Animal tattoos have been around for many centuries in human culture; however, a pet’s concept is relatively new. Most animals are not domesticated; therefore, our pets include companion animals like cats, dogs, birds, and so on.

Dogs and cats are the most popular designs for pet tattoos. People who have a deep affection towards their pet or want to remember them so it by getting them inked.

A Dog tattoo has a long history and deep symbolism dating back to ancient times. People who get a simple dog tattoo hold a deep kinship or a profound relationship with what they represent.