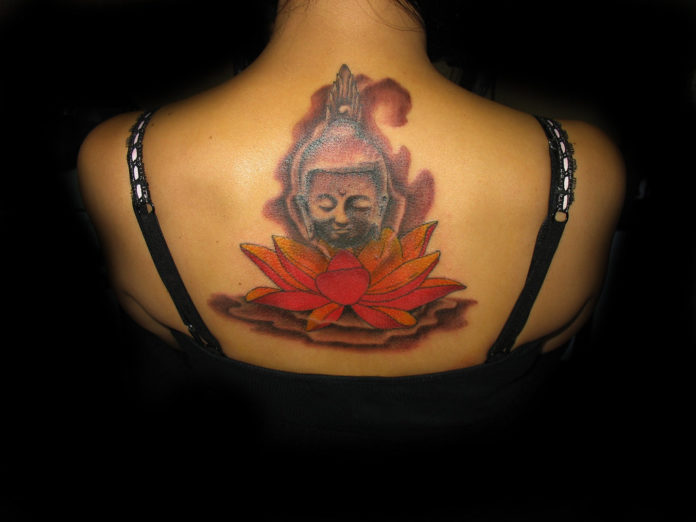 At present, the trend of Buddha tattoos is remarkably increasing among people. It is due to the reason that Buddhism is one of the great religions in the world which encourages people to avoid self-denial and self-indulgence.

Buddhism has a wide range of interpretations and philosophies, making it an evolving religion.

Many scholars recognize Buddhism as a “spiritual tradition” or a “way of life.” In fact, Buddhism is also considered one of the best self-help books that are ever written.

Buddhism practice has been most prominent, mostly in East and Southeast Asia. However, it is also growing in the West.

Nowadays, many people get Buddha tattoos to show their dedication and respect towards philosophy.

Here is an article with all you need to know about Buddha tattoos, their meaning, and symbolism.

Moreover, we have also rounded up information about Buddhism in order to help you better understand the meaning and relevance of the Buddha tattoos.

Siddhartha Gautam is the founder of Buddhism, who later became popular as “the Buddha.” He lived during the time of the 5th century B.C.

He was born in 567 Bc in a wealthy and royal family located near the foothills of the famous Himalayan Mountains.  Siddhartha was the prince of a small kingdom and had everything in terms of luxury.

There were servants in the house to attend to his every need, beautiful palaces, delicious food, and a lot of wealth.

When he was born, a local Brahmin said that either Princess Siddharta would become a great king who would unite all the kingdoms or become a great spiritual teacher.

His father wanted him to become a king, so he tried to keep his son from the world.

Nevertheless, one day Prince Siddhartha was on the streets of the town outside his palace. There he saw an old man, a sick old man, and a dead body. This view completely changed his life.

He was moved by suffering in the world. The event led him to question his existence and reality. He realized that every human being is the same, and death comes to all.

He also realized that suffering is a general human condition. It led him to a lifelong quest to see what efforts he could make to end the sufferings present on the earth.

So he decided to give up his royal life and work to endure poverty. When this idea did not fulfill him, he encouraged the idea of the “Middle Way.” It refers to existing between the two extremes.

After six years of roaming and searching, Siddhartha found enlightenment while he was meditating under a big Bodhi tree. From this point, he became popular as Buddha.

After this, he spent the rest of his life, teaching others how to attain a spiritual state.

Path of the Buddhism

Buddhism is a philosophical system that is intended to help people to ease the suffering of all people. Buddha attained insight into the causes of human suffering. He also devised different methods to comprehend and alleviate suffering.

Buddha discovered four noble truths, Dharma, and an eightfold path that could help every person to achieve personal enlightenment.

The teachings of Buddha are known as Dharma. He taught that patience, compassion, generosity, wisdom, and kindness are essential virtues.

One of the greatest features of Buddhism is that it is for everyone on earth. It is not divided on the basis of castes or classes.

Moreover, there is no separation on the basis of cultural origin, no need to worship some divine being that is out-of-reach, and there is no judgment of an individual.

When Siddhartha was working to find different ways to alleviate human suffering, he also introduced a great work of philosophy based on ways to live a good life.

The ideas of Buddhism can be complex, but they address ways to identify, deal with, and finally end the sufferings. It is difficult to follow the path of Buddhism as it needs a lot of self-discipline.

Now that you know about the origin and path of Buddhism, you might have got an idea about the beauty of this philosophy and the reasons for its increasing popularity. Many people get Buddha tattoos inked on their bodies not only for fashion but also to show respect.

Buddha Tattoos are simple and beautiful. They represent a sense of serenity and peace. They mainly represent who you are as a human. You can also use

There are some popular symbols in Buddhism. Bushism symbol tattoos have always been in trend. They look amazing and also set up a style statement.

Below mentioned are some Buddhism symbols that you can use as Buddha symbol tattoos.

The lotus flower is an important symbol in Buddhism. A lotus flower carries elegance and grace as it is soft, gentle, and is a combination of beautiful colors.

According to Buddhism, the lotus flower is a symbol of the struggle of humans for enlightenment.

Moreover, lotus flower tattoos are a perfect choice if you are looking for something unique and beautiful.

The swastika is another Buddhism symbol and is also one of the popular Buddha tattoo ideas.

In Buddhism, the swastika is a symbol of the footprints of Buddha. The shape symbolizes the auspicious eternal cycling.

The word swastika originated from the Sanskrit language. It means well-being, prosperity, and good fortune. So if you are looking for small buddha tattoo ideas, then this is the best one.

Bodhi tree is one of the sacred symbols of Buddhism due to various reasons. It is a place where Buddha attained enlightenment. It is considered a wisdom tree and is associated with the path of enlightenment.

A Bodhi tree is an amazing tattoo included in the list of Buddha tattoo ideas. It represents life, endurance, wisdom, resistance, and longevity.

The eight spokes of the Dharma wheel represent the eightfold path. It is one of the oldest and universal symbols of Buddhism. You can get the eight-spoked dharma wheel inked on your body.

Buddha has been depicted in various forms throughout the centuries.

In this depiction, Buddha is seated in the lotus position and has both hands resting in his lap. This tattoo symbolizes a search for serenity and meaning in one’s life.

In this tattoo design, also the Buddha is present in the lotus position with one hand resting in lap and the other one pointing towards the ground, which represents his moment of becoming enlightened. The tattoo represents the search for peace.

Mostly of the Buddha depictions include Buddha sitting or meditating, but the walking Buddha tattoo is unique. It represents inner grace and beauty.

Should You Get a Buddha Tattoo?

The beauty of Buddhism is that it is for everyone. So, you can get a Buddha tattoo if you are seeking personal enlightenment and truth.

Buddha tattoos are best for people who have experienced change and are looking for ways to attain enlightenment.

A Buddha tattoo represents a search for truth, love, and the journey to achieve enlightenment. It symbolizes community values and shows that you are committed to understanding as well as ending suffering.

Keep in mind that Buddhist tattoos are considered disrespectful in some cultures.

Greater importance is given to Buddhism globally, making sense to have a Buddha tattoo if you understand and appreciate Buddhism. Moreover, if you seek peace and personal enlightenment in your life, then Buddha tattoos are a perfect choice for you.