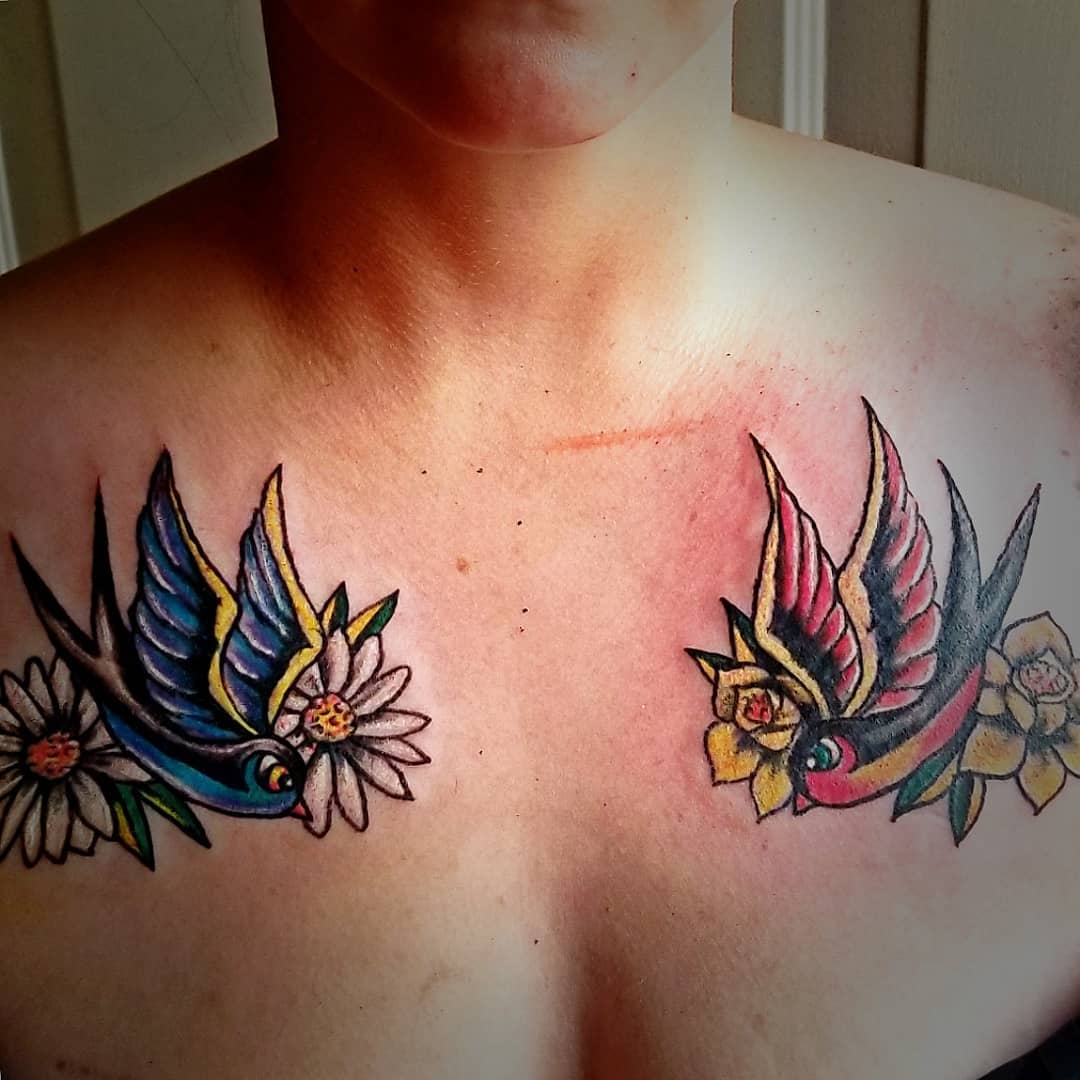 The sparrow might not be the flashiest bird type, but it has become a favorite choice among youngsters for tattoos. Swallow tattoos are related to commitment, love, and freedom, but there are many different and great meanings which have contributed to their popularity.

In This Article hide
1 Meaning and Significance of Swallow Tattoo
2 What does a sparrow and swallow tattoo symbolize?
3 Who Created the Popular Swallow Tattoo?
4 Right Spot to Get a Swallow Tattoo
5 Which Swallow Tattoo You Should Get?
6 What is the difference between swallow and sparrow tattoos?
7 Final Words by Fix The Life

The sight of a bird touching the sky heights freely always fascinates humans. It symbolizes the freedom of mind and spirit, and somewhere we all want the same thing.

Eagles and owls are often associated with transcendent wisdom and flight that has no boundaries; other birds, such as swallows, are related to adventures, freedom, and uninterrupted exploration.

Here is an article with all you need to know about the significance and symbolism of swallow tattoos and what they reveal about your personality.

In Ancient Roman and Greek mythology, swallows represent the departure of a person’s soul. It said that the Gods could transform themselves and take the form of a beautiful swallow bird.

Many people consider swallow birds as their “spirit animal,” which symbolizes happiness, grace, and peace in their lives.

Meaning and Significance of Swallow Tattoo

For decades, swallow tattoos have been used as a standard in the imagery of animal tattoos. For instance, the traditional style tattoos of “Sailor Jerry” tattoos included swooping sparrow with open wings to symbolize swift flight.

There are different meanings of swallow bird tattoo. The movement of swallow birds symbolizes liberty and freedom to travel to the place where one feels happy. Moreover, the movement is also a symbol of cunning and quickness.

A sparrow with open wings in flight also represents a swift mind and has a unique meaning.

You might not have noticed. But swallows are also associated with love. When swallows mate, they mate for their whole life, due to which they have become a symbol of fidelity in relationships and monogamy. Tattoos having a pair of sparrows represent love, loyalty, and strong relationships.

Sparrows always travel with their clan, which offers them protection. Due to this reason, the swallow tattoos can also be used to convey a love for community and inclusion. It makes the sparrow tattoos a perfect choice for a couple tattoo.

What does a sparrow and swallow tattoo symbolize?

Some species of swallow tattoos can travel longer distances as compared to others while migrating every year. It has associated swallow tattoos with homecoming and travel, making it a popular choice among adventurers and travelers.

A traditional swallow tattoo containing two swallows is used to symbolize a long journey. Historically, swallow bird tattoos were used by British sailors to boast of their amazing and long travel experience.

According to a legend, a single swallow tattoo means that the person wearing the tattoo has sailed for around five thousand miles.

Two swallow bird tattoos mean the wearer has sailed around ten thousand miles. It was a great achievement in the 17th or 18th centuries when sea travel was risky and full of dangers.

Fortunately, now you do not have to justify wearing the swallow tattoo or how you earned it. But it is still shorn of that pride and honor. It symbolizes some essential qualities and characters which are important for the wearer.

According to another myth, the swallow tattoos are associated with a mutiny on a ship named “The Swallow.” There were seven mutinies who started the revolt, and they had a swallow tattoo inked on their chest. The tattoos were inked so that they could recognize each other.

Swallows are popularly associated with the Spring season, which is the season of fresh hope, renewal, and awakening. In Egyptian poetry, it is often mentioned that the swallow bird brings a sign of new love. Therefore, a swallow tattoo also symbolizes love and hope.

A swallow tattoo also symbolizes holiness and purity. Back in the days, seeing a swallow in the Spring season was considered a good omen, and it represented the arrival of financial success.

So succinctly, nothing bad or harmful is associated with a swallow tattoo. Other swallow tattoo meanings include gaining victory or surviving hardship after a long and tough battle.

Who Created the Popular Swallow Tattoo?

Sailor Jerry is known to be the creator of the famous swallow tattoo. Most clients of Jerry were sailors. He used simple and elegant lines to make the colorful swallow tattoos in an expressive manner.

Jerry used to make sketches of beautiful Barn Swallows in blue, white plumage, and red color with a green and brown touch.

Right Spot to Get a Swallow Tattoo

Now let’s come to the practical matter. If you are planning to get an intriguing swallow tattoo, then the question is where you should get it? And what else can you include in the traditional swallow tattoo design?

Many people like getting a bird tattoo on hand and many prefer a swallow tattoo on the chest. The placement of the tattoo plays an essential role in symbolization or meaning.

However, the image of a flock of swallow birds in flight in the neck or hand can mean something sinister. It refers to having spent some time in jail. In the United Kingdom, a tattoo of a swallow bird on hand means “these fists fly.” This tattoo is worn by hard men who were known as fighters.

Which Swallow Tattoo You Should Get?

There are various swallow tattoo designs, and if you are not clear about which one you should get, make sure to do proper research and explore swallow tattoo images online.

You would surely find some creative ideas by seeing how people have got their bodies inked. Moreover, you can also ask your tattoo artist for suggestions.

Read more about the symbolism of tattoos to find out the best one. Pick a swallow tattoo design that you find fascinating and appealing. It will allow you to have a meaningful and lasting reminder that you will enjoy for a long time.

Bird tattoo choices are highly popular for body inking. And the trend of swallow tattoos will continue to be in trend because they have historical context, symbolism, and purposes.

What is the difference between swallow and sparrow tattoos?

Now you must be thinking, are swallow tattoos and sparrow tattoos the same? The answer is no. There is a remarkable difference between the two.

There is a lot of confusion between sparrow tattoos and swallow tattoos. It is quite hard to understand the difference between the two birds as they look similar and have some common behavioral characteristics; otherwise, they are completely different.

A swallow bird has a curved and forked tail as well as pointed wings. On the other hand, sparrows are grayish brown and have short wings. Sparrow tattoos are less common and have religious connotations.

A sparrow tattoo represents assertiveness and determination and symbolizes a strong character. On the other hand, a swallow tattoo is considered subtly optimistic and gentler in a different way. It is an indicator of growth and freedom.

Final Words by Fix The Life

The meaning of swallow tattoos might differ in different contexts and regions, but one thing is constant that this tattoo represents good things in life. The swallow bird tattoo symbolizes freedom and growth. So now what are you waiting for? Get a beautiful swallow bird tattoo inked on your body. Do share your experience with us by dropping a comment.