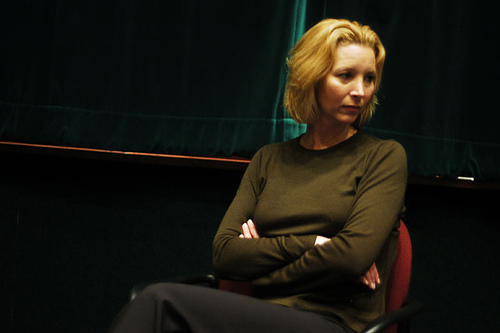 Sweet, earnest, bohemian, funny, and weird Phoebe Buffay urf Lisa Kudrow never failed to deliver some hilarious punch lines in one of the most loved shows, “Friends”. We all know about the reel life of Lisa Kudrow but do you want to know something about her real life? If yes, then keep reading this article to find out what Lisa Kudrow net worth and real estate are like.

Lisa Kudrow Salary and Net Worth

Lisa Kudrow is an American actress with a net worth of $90 Million. She is famous for her role as Phoebe Buffay on the popular sitcom “Friends,” and with this kind of money, we bet she can rescue every smelly cat.

On July 30, 1963, she was born in Encino, California, in an upper-class Jewish family. Lisa is the youngest of three children, and she believed in following her father’s footsteps and become a doctor in the future. She got her doctor’s degree from Vassar College and worked in her father’s practice for eight years before getting her first acting break.

Her initial acts were centered on comedy, and she did small roles on Cheers and Bob Newhart sitcoms. She played the role of Ursula Buffay on a 1990s sitcom Mad About You on NBC, which eventually earned her the role of Phoebe Buffay, a naive and aloof massage therapist.

Phoebe Buffay quickly earned a lot of fans because of her personal contradictions in the show. For instance, she was a vegetarian who also ate meat when pregnant and an animal rights activist who once wore fur. The character was popular for bizarre folksy songs played on acoustic guitar. The character of Phoebe Buffay earned Lisa Kudrow’s first Emmy Awards for supporting roles in the entire Friends Cast.

Lisa Kudrow, Courtney Cox, and Jennifer Aniston set a world record of highest-paid television actresses ever when each of them made earning of $1 million per episode.

she married Michel Stern in 1995, and they have one child together.

Read More:- Learn Everything About the Net Worth of Matthew Perry Aka Chandler Bing

If you total this, each Friend’s cast earned $90 million as base salary before any bonus and royalties.

As part of 2000 contract negotiations, the entire cast had the right to demand royalties on the show’s back-end points. Till that point, the only stars who had ownerships in stakes of shows were Bill Cosby and Jerry Seinfeld. Friends cast generated $1 billion per year as royalties and streaming deals. In some years, the cast also earned $10-$20 million in royalties alone.

The salary from the show has a major role to play in Lisa Kudrow’s net worth.

Lisa Kudrow is the owner of several beautiful mansions around the world, notably in Los Angeles. In 1996 she bought a 6,400 square-foot home in Beverly Hills for $1.9 million. Lisa bought her second home in Beverly Hills for $2.4 million in 2001, which is close to Rodeo Drive. In April 2017, she sold her Park City Penthouse in Utah for $3.6 million.

Check out some hilarious quotes and punchlines by Phoebe Buffay.

“Come on, Ross, you’re a paleontologist. Dig a little deeper.”

“Oh, my God, a woman flirting with a single man? We must alert the church elders!”

“Something is wrong with the left phalange.”

“You should see me when I actually… Oh actually, no, I look good.”

“I’m a lady, Monica. I don’t kiss and tell. But this hickey speaks for itself.”

“Well, if she isn’t (dead), cremating her was a big mistake.”

“This is the nicest kitchen. … The refrigerator told me to have a great day.”

“One really does have a stick up one’s ass. Doesn’t one?”

“Oh, you like that? You should hear my phone number.”

“Didn’t you ever run so fast you thought your legs were gonna fall off, you know, like when you were running toward the swings or running away from Satan?”

Discussing Christmas trees: “I am against innocent trees being cut down in their prime and their corpses grotesquely dressed in, like, tinsel and twinkly lights.”

To Ross: “You love divorce so much, you’re probably gonna marry it – and then it won’t work out, so you’re gonna have to divorce it.”

“They don’t know that we know they know we know.”

“Everybody looks so happy. I hate that.”

“I think the most romantic song is the one that Elton John wrote for that guy from ‘Who’s the Boss?’… You know, ‘Hold me closer, Tony Danza.'”

“Are you in there, little fetus? In nine months, will you greet us? I will … buy you some Adidas.”

“I’m a pacifist. But when the revolution comes, I’ll destroy all of you.”

“If you want to receive emails about my upcoming shows, please give me money so I can buy a computer.”

Monica: “Phoebe, do you have a plan?”