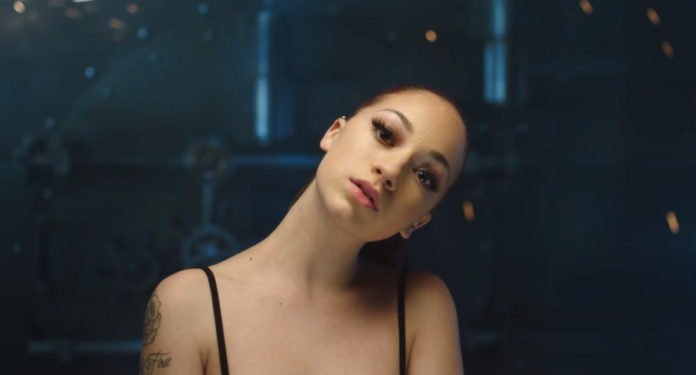 Danielle Bregoli, famous by the name Bhad Bhabie, is an American rapper and social media star with a $4 million net worth. She became a global sensation after making an appearance on “Dr.Phil” in 2016 and used her popular catchphrase “Cash me ousside how bow dah,”. This happened to become the most popular and viral memes of the year.

Read More- How Usher Garnered His $180 Million Net Worth?

Danielle Peskowitz Bregoli was born on March 23 2003 in Boynton Beach, Florida. Her father Ira Peskowitz & mother Barbara Ann Bregoli had Barbara after one year in relationship. Barbara was inflant when they broke up. Her father is Jewish and mother is Italian descent. She was raised in a Catholic culture by her mother while her father used to work as a deputy at Palm Beach County’s Sheriff Office. Danielle is not close to her father.

After appearing in the Dr.Phil show in 2016 Danielle became very famous. She quickly gained a major fan following on social media and even appeared in music videos like “Everything 1K by Kodak Black”. In 2017 she was also nominated in the “trending” category of MTV Movie and TV awards because of her infamous catchphrase.

After the Dr.Phil show, Bregoli spent some time in rehab in Utah especially meant for troubled teens. Later she was also arrested for grand theft, filing false police reports and marijuana possession. She was later pleaded guilty and was on probation for five years in July 2017. Danielle hired a new lawyer and renegotiated her charges and was released from probation in March 2018.

In 2017 Danielle released her debut single named “These Heaux” and was the first ever youngest rapper to appear on Billboard’s Hot 100 Chart. Bregoli signed a contract with Atlantic Records and also runs a reality show, has a successful music career and launched her own makeup brand. Her first ever mixtape was named “15” which was released in September 2018. Her second hit single to appear on Billboard Hot 100 charts was “Hi Bich”.

Danielle has taken advantage of her fame to cash every opportunity she can. By 2020 her instagram had a fan following of 17.9 followers, 5,68,000 followers on Twitter and Youtube channel has 7.4 million subscribers. She earns a significant amount of money by doing paid posts and by giving product placement on Instagram.

Her first ever paid posts were of Postmates and Fit Tea. The placement was done so well that the Fit Tea video received more than 12 million views. Danielle easily makes $30,000 every month by giving product ads and upto $10,000 for one single post.

Danielle signed a $1 million deal on July 11, 2019, for publishing/songwriting with a company named Pulse Music Group. The deal helped her earn $350,000 upfront and pay $350,000 installment after reaching pre-decided revenue milestones. This deal has a $1 million payment for future royalties. In the future, she also has the right to earn 70% of the future record sales.

Moreover, Danielle Bregoli also charges $40,000 for meet and greet sessions, as she did for Rolling Loud Music Festival in May 2018. She not only made $40,000 for giving an appearance on the show, but the owner of the festival also threw a 14th Birthday party for Bregoli at the venue, and she received certain ticket sales.

Danielle Bregoli signed a deal with Snapchat in December 2018 to create a social network reality series. The Snapchat show named “Bringing up Bhabie” received more than 10 million new viewers within the first 24 hours. This reality series has a total of 24 episodes.

Danielle Bregoli earned $900,000 in January 2019 for the endorsements of a new cosmetic company called “CopyCat Beauty” for upto six months. She was also entitled to earn certain percentages from the profits. According to the deal, if the endorsement does well, Bregoli has entitled to a large bonus and also an opportunity to create her own makeup brand., which she did. According to some reports, Danielle Bregoli is also going to act on television and in movies. This immense success on social media helps Danielle Bregoli to keep adding in her net worth.

Read More- An Insight Into Master P Net Worth

Danielle Bregoli says she is bisexual and open to dating both men and women. She was living with her former girlfriend for a long time.

In 2020 Danielle threatened Skai Jackson, a Disney Channel Star, in a video posted on her social media. For this act, Skai filed a restraining order against her and also alleged that Bregoli is threatening her life. Jackson made a statement claiming that she is afraid to leave her house alone and has not slept well after Danielle’s life threats. Skai also stated that Bregoli is not mentally stable.

Jackson also shows Danielle’s text messages to the Judge in which she told Skai she wanted to fight her. The Judge right away granted a restraining order for Bregoli to maintain at least 100 yards distance from Skai, her workplace, and her home. Also, she is forbidden to make contact with Skai in any manner possible.

Bhad Bhabie is the most famous influencer of today’s young generation. Here are some of the popular quotes by Danielle Bregoli.

Someone who’s fake is someone who acts one way around their family and their close friends, but once they get out in the public, they’re this whole different person.

Teen boys are a huge mess.

I just wanna keep Yachty forever, just take him home with me.

I was bad, but I was one of the kids that never got caught. If anyone ever knew I did something, it was because I told them. ‘Cause I’m a really good liar, so I end up snitching on myself.

I’ve always liked music since I was younger.

Ever since I was younger, I was fascinated by cars and driving. The first time I actually drove a car, I was twelve years old.

I’m just me, all the time. People think, ‘She must be an innocent little white girl when she’s not performing or making videos.’ But no, I’m me all year round, 24/7.

I just don’t care what people have to say. I keep pushing toward what I want. It’s just how I am. I don’t know where I got it from.

I get braids all the time. You can’t tell me I’m acting black because I braid my hair. That makes no sense whatsoever.

Which rap song of Danielle Bregoli do you like the most? Leave your answers in the comments below!