Home Eats Drinks What is The Difference Between Apple Cider And Apple Juice.
Twitter
Tumblr
Email 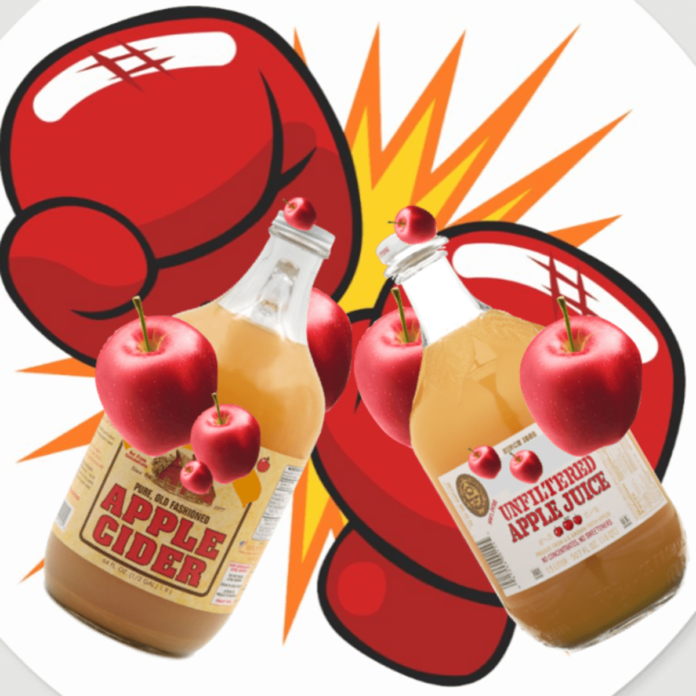 One main difference is that apple juice is typically pasteurized, which involves heating the liquid to kill harmful bacteria. On the other hand, Apple cider is often sold unpasteurized, meaning it has not been heated and may contain live bacteria.

Another difference is that apple juice is often sweeter and has a smoother texture due to the filtering process, while apple cider has a more tart and slightly grainy texture.

Overall, the main difference between apple juice and apple cider is the processing and filtering methods used to create the final product. Some people may prefer the sweeter, smoother taste of apple juice, while others may prefer apple cider’s more robust, tart flavor.

On the other hand, apple juice is typically pasteurized, filtered, and processed to remove any solids. It is clear, with a lighter color than cider, and often has sugar added to it to give it a sweeter taste. It is also generally smoother in texture compared to cider.

Additionally, cider is usually tangier in taste and has no added sugar, while the juice is sweeter due to added sugar.

Apple juice is often made from apple concentrate that has been reconstituted and mixed with other ingredients. It is then pasteurized and filtered to produce a clear, consistent liquid. It is typically sweeter and less tangy than apple cider and may have added sweeteners and flavors. The color of apple juice is usually a pale yellow or light amber.

Apple juice and apple cider are two popular drinks made from apples, but what is the difference between the two? One key factor is how they are processed, which can vary between brands.

In general, apple cider is made by pressing fresh, unpasteurized apples and may contain sediment and pulp, resulting in a darker, cloudy appearance. It is also typically unsweetened and has a tangy taste.

On the other hand, apple juice is often filtered and pasteurized and may have added sweeteners or “natural flavors” to make it a clearer, yellow color.

Some brands may also use apple concentrate and syrup to make their apple juice.

ALSO CHECK: With Juices, What Does From Concentrate Mean?

In the United States, apple juice and apple cider are often used interchangeably, but there are some differences between the two. Apple juice is typically made from concentrated apple juice.

Apple cider is also typically unfiltered and has a more robust, tangy flavor, while apple juice is usually filtered and has a sweeter taste. In other countries, cider may refer to an alcoholic beverage made from fermented apples.

How to Use Apple Cider and Apple Juice

When choosing a drink, your personal preference is the most important factor. However, if you are using apple juice or cider in a recipe, apple cider is often the preferred choice due to its more authentic, natural apple flavor.

Some companies offer unfiltered apple juice and cider, making them a great option for any recipe.

Apple-flavored and apple-inspired dishes are popular during the fall, but apple juice and cider can be used in various recipes all year round.

Try using them in a warm Apple Hot Toddy on a cold night or in a refreshing Green Apple Smoothie for breakfast or a snack. These ingredients can also add a delicious appley flavor to savory dishes and desserts.

How to Store Apple Cider and Apple Juice

Apple juice that has been pasteurized can be stored on a shelf for several months and does not need to be refrigerated until opened. Unpasteurized apple cider (or, in some cases, apple juice) is perishable and should be kept in the refrigerator.

It will last about 7-10 days. Pay attention to the expiration date on your label and consume either beverage promptly to ensure freshness and safety.

Apple Cider or Apple Juice – Which One is Better For You?

Filtering cider to make apple juice may remove some of its nutritional value. However, apple juice and apple cider have similar sugar, calories, and vitamins.

The choice between apple cider and apple juice depends on your intended use and personal preferences. Apple juice is generally sweeter, while apple cider has a fuller, earthier flavor. Some brands label both products similarly, so check the ingredient list and the color if you need clarification. When using these products in a recipe, apple cider is usually the better choice. However, unfiltered apple juice is similar to apple cider and can be used in recipes. If the liquid is cloudy or opaque, it has yet to be filtered and will likely work well in your recipe.

4 Ways To Storing Your Wine At Home

9 Tips On Choosing The Right Beverage For Your Event