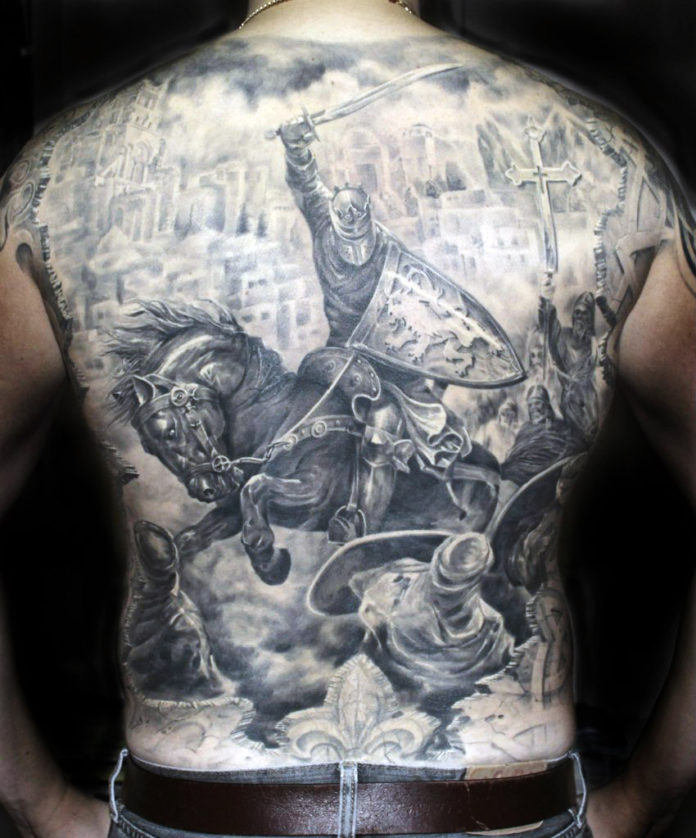 Do you believe you have the spirit of a warrior? Or is there a warrior angel protecting you from evil? Well, then getting inked with warrior tattoo designs can be something to express your personality and belief in style.

There are a number of warrior tattoo designs that you can get inked with. The good thing is that most of the designs are meaningful and attractive, which will give you something to flaunt. Some of the most popular designs include the Aztec warrior tattoo, warrior angel tattoo, and more.

In the article, we will tell you all about some of the most popular and attractive warrior tattoo designs, which you can get inked as body art.

These are some of the most enticing warrior tattoo ideas which you can get inked:

Do you want to get inked with something legendary? Or are you a fan of history? If yes, then the Aztec warrior tattoos are a perfect thing for you.

The Aztec tattoos are one of the best warrior symbol tattoo ideas that you can get inked as body art. They have cultural, historical, and legendary roots and have deep meanings behind every stroke or pattern in the tattoo. The Aztec warriors were brutal as well as mysterious. In the Aztec tattoo design, you can choose from a wide variety of eye-catching symbols and idles.

In most of the Aztec warrior tattoo ideas, you will find traditional symbols and idles inked. They are mostly done in black ink, which gives them a deep and mysterious tone along with making them intimidating. Other than this, in these designs, people also choose to get inked with the various carvings from the Aztec sights.

Africa is the home to the oldest civilization in the world. Most of the humans are believed to have originated in the African continent and then migrated to different continents. This is why it is no surprise that the African warrior tattoo designs are so popular. They have deep cultural and historical roots along with deep meanings behind them.

In the African tattoo designs, you will see elements like a bow and arrow along with the warrior having some wild markings. They are also done in mostly black ink to make them look intimidating. Other than this, in the African warrior tattoo ideas, you can see various things like the lion and a warrior as most of the tribes live in jungles.

The modern African warrior tattoos include people with guns. One of the most popular modern designs is that of a soldier with an AK, and a cigar-making him look badass.

In the warrior angel tattoos, one of the most popular is an image of the archangel Michael. Other than this, you can also get a design according to you. All you will need to do is select the design and add some really fancy and powerful-looking wings to it. Some of the most popular design ideas for warrior angel tattoos include an angel with wings and a sword in one hand with light emerging behind them.

In other designs, to make it even more, intimidating you can also add an evil or demon being killed by the angel. Some other combination ideas which you try with the warrior tattoo design are the cross tattoo, christ tattoos, and more.

The Vikings warrior tattoos are one of the most popular among people who want something fierce and meaningful. Vikings were the ancient warrior who used to live in the Scandinavian region.

These people were believers of Norse mythology and the gods from Norse mythology. Some of the most common Vikings warrior tattoos include thor tattoos, Norse mythology symbol tattoos, and the hammer of thor. Other than this, the inking of the warrior from the tribe is also popular.

You will see a warrior with a long beard and a helmet with horns over it and ax and hammer in hand in the Vikings’ tattoos. Other than this, you can also go for some full-body tattoo ideas in making tattoos.

Are you a fan of Japanese tattoos? Or do you believe in the ninja and their legendary samurai warriors? If yes, then the Japanese warrior tattoos are the perfect option for you that you will love for sure.

The tribal warrior tattoos are one of the most popular when it comes to getting a really attractive body art. They are mostly geometrical in nature and include various elements in a single tattoo.

In the tribal tattoo design, you will see wide strokes patterns generally in black color. The tribal tattoos use these wide strokes of color to make the pictures and configurations of various things like warriors or warrior symbol tattoos. Some of the popular symbols which you find in the tribal tattoo is that of a sword, shield, raven, and more. Overall they are one of the most expressive kinds of warrior tattoos that you can get.

One good thing about the tribal tattoo is that they do not have any fixed image or pattern for designs. So, you have the option to choose between the colors and patterns. You can go for geometrical or other patterns and also combine them with various other things like skull tattoos, flower tattoos, and more.

These are some of the most popular and artistic warrior tattoo designs which you can get inked. The good thing about most of the designs listed above is that they all have deep cultural, historical roots and are meaningful.

Do you want to get inked with something with cultural, historical roots that is also meaningful? If yes, then the warrior tattoo designs are a perfect option for you.

There are a number of warrior tattoo ideas which you can try for yourself. The good thing about most designs is that they are fierce and artistic and symbolize various things. Some of the common meanings of the tattoo design include strength, fearlessness, power, protection, and to depict heritage roots.

What do you think about the warrior tattoo designs? Which one is your favorite? Please do let us know in the comment box.

How To Roll A Blunt The Right Way