Home Birds Do Ducks Have Teeth? Everything You Need to Know About Duck Teeth
Twitter
Tumblr
Email 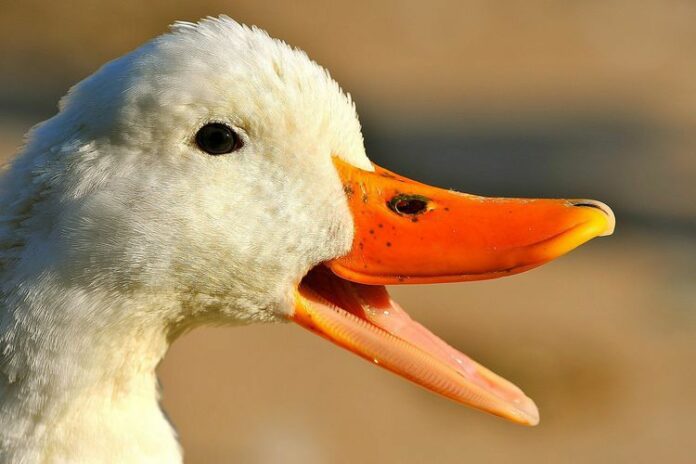 Ducks are birds that eat a lot of different things, like nuts, seeds, bugs, fruits, and even little animals from the water. But do ducks have teeth as we do? They don’t have teeth like us, but they have something special in their beak that helps them eat. Their beak is divided into different parts, and each part helps them eat different things. It’s fun to learn how ducks eat, so we can understand why they eat the way they do.

Do Ducks Have Teeth?

Teeth are like hard little helpers that some animals have in their mouths. They help animals chew up their food before they swallow it. Some animals, like us, have them. But some animals use their teeth for different things, like catching food.

Do ducks have teeth? No, they don’t! And no other birds have teeth, either. That’s why people say “as rare as hen’s teeth” because it’s very hard to find something that doesn’t exist.

Birds have very different mouths than other animals with backbones. A long time ago, their jaws changed into something special called a beak or bill.

All birds use their beaks instead of teeth to get and eat food. Beaks come in many shapes and sizes, depending on the type of food each bird likes.

Ducks Don’t Have Teeth But Then How Do They Eat?

If you look inside a duck’s beak, you’ll see small, comb-like parts called “lamellae” along the edges. These may look like teeth, but they are part of the beak.

The beak of most ducks is wide and flat, and the bottom part can open a little bit to let water flow through. The lamellae help ducks strain food like plants and small creatures out of water or mud.

Ducks like the Northern Shoveler have the most lamellae of all ducks and use them to filter food.

Ducks and geese are the most common birds with these comb-like parts called “lamellae” inside their beaks. But other birds that filter-feed, like flamingos, have them too.

Even though the lamellae look like teeth, ducks don’t use them to chew their food. If you’ve seen a duck move its beak around like it’s chewing, it’s just trying to move the food around before swallowing it.

There are some other cool things to know about duck beaks besides the comb-like parts:

The edges of a duck’s beak are soft, and can feel things easily. This is because many ducks find their food by touch. The tip of the top part of the beak has a hard bump called a “nail” that ducks use to dig through mud to find food.

In addition to the comb-like parts, some ducks and geese have little pointy things on their tongues called “papillae.” These help them filter food as well.

ALSO READ: You Will be Surprised to Know these Facts.

Ducks don’t have teeth as we do, or like other animals like tigers, wolves, or cows. But they have special things in their beak that help them eat.

Their beak is different from other birds, and it helps them eat different food types. They can eat without having teeth, and it’s interesting to learn how they can do that.

RELATED: How Long Do Ducks Live?

Ducks don’t have teeth as we do, but they have a special shape in their beak that helps them eat. Their beak is like a spoon, flat and long. This shape helps them crush their food, but it’s less strong than teeth.

They also don’t chew their food as we do. This shape also helps them find food in the water or mud. Different ducks have different beak shapes, which helps them eat different things.

Ducks don’t have teeth as we do, but they have something called “lamellae” in their beak. These are like small, thin combs or fringes on the side of their beak. They look like serrated teeth. These structures help ducks filter or strain food from mud or water.

Different ducks have different numbers of these fringes, which can be different lengths and spaced differently. You might not be able to see them unless the duck’s beak is open or if there is an injury or something wrong with the beak.

Some other birds, like geese, swans, and flamingos, have these fringes in their beak. Even though they’re not “real” teeth, they help ducks eat.

ALSO READ: Everything You Need to Know About Ducks.

Ducks have a small bump on the tip of their beak called a “nail.” This bump can be of different shapes, sizes, and colors. Sometimes it’s the same color as the beak, and other times it’s different.

This nail helps ducks dig through mud or leaves to find food. They use it to uncover small roots, seeds, worms, and other things they like to eat.

Other birds, like geese and swans, have nails on their beaks. For some types of ducks, like the lesser scaups and greater scaups, the nail can be a way to tell them apart from other ducks.

ALSO READ: How to Keep Ducks Away From Your Pool?

Ducks have something on the side of their beak called a “grin patch.” It’s a little curve that looks like a smirk or a smile. This helps them filter and find food.

The grin patch might be a different color than the beak, but scientists don’t know everything about it yet. Not all ducks have a grin patch, and it’s more common on geese and swans. Some penguins also have a grin patch on their beak.

Different types of ducks look and behave differently, but generally speaking, there are two groups of ducks:

1.Dabbling ducks mostly eat food from the surface of the water. They tip forward and stick their heads in the water to find food.

2.Diving ducks go under the water to find food. They use their feet positioned at the back of their bodies to swim down to find food.

There are many different kinds of ducks that live in North America. Some of them have evolved different beaks to eat different types of food. Here are a few examples of the interesting ways North American duck species have adapted their beaks for their diet:

Mallards are like the “jack of all trades” of the duck world. They eat plants from ponds, worms from land, and even corn from farm fields. Their beak is the classic “duck bill” shape.

Northern Shovelers are named after their very long and wide beaks that they use to scoop up small creatures from the water’s surface. The top part of their beaks has over 200 little ridges called “lamellae” that act like a strainer.

Wood Ducks have a different kind of beak than most ducks. It is shorter and skinnier, which helps them to eat plants, bugs, and acorns (one of their favorite foods) from the wet and wooded areas they live in.

Canvasbacks are a type of duck with special beaks that help them eat plants growing in the water. They mostly eat these plants when they are traveling and during the winter. But when making babies, they also eat other things like bugs and small fish.

Surf Scoters are a kind of duck that live near the ocean. Even though they make their nests in freshwater lakes in Canada and Alaska, they’re still called “sea ducks” because they spend a lot of time in the sea. They use their big, strong beaks to open up shells and eat mussels and clams that live on rocks under the water.

Red-breasted Mergansers are a kind of duck different from most other ducks. They don’t have a special comb-like thing in their beak that helps them catch food. Instead, they have long, pointy beaks that are good for catching fish in the water.

Ducks have special things in their beak that help them eat, but they don’t chew their food as we do. They use small bites and nibbles to get the food in the right position to swallow it whole.

They might break up some softer foods, but they’re not chewing. Ducks have special glands that make spit, which helps them swallow their food.

If you like to feed ducks at a pond, you should know that they don’t have teeth. So, it’s important to give them food that is easy for them to eat.

Ducks eat food by swallowing it whole, so the food should be small enough to swallow without choking. Good foods to give them are birdseed, cracked corn, or small pieces of veggies like peas or corn.

These foods are also healthy for them to eat. If you want to give them bigger foods like grapes, cut them into small pieces first. Don’t give them bread, cookies, chips, or popcorn because they are not good for them, and they can’t eat them easily.

Birds eat differently than we do and don’t have teeth like other animals or us. Ducks have a special bill that helps them eat.

By learning about a duck’s bill and how they eat, we can understand why ducks act the way they do and what foods are best for them.

Feeding Does Not Help Ducks

You can help ducks that live in the wild by supporting people who want to protect their homes and places where they can find food. But, it’s not good to feed them bread or other foods that aren’t good for them.

Giving them food can make many ducks come to one place, and it’s unsafe for them. Also, when ducks don’t eat all the food, it can dirty the water and bring in pests that we don’t want around.

POINT TO REMEMBER: We must not feed the water birds as it can cause harm to them.

Q: How many teeth does duck have?

ANS: Ducks do not have teeth.

Q: Does a duck bite hurt?

ANS: Yes duck bites are painful and can cause bleeding.

Q: Do duck tongues have teeth?

ANS: Ducks have tongue but they don’t have teeth.

Can Ducks Fly – A Complete Guide on Ducks Flight

Why Do Ducks Stand on One Leg? You Will Be Amazed to Know